So I started working on a method to compose posts better, for my idea of better at least. Version one of qzpostfilt (and a README and some test code) is available in the git repo and browsable here.

It's a mis-mash of Markdown and nroff/troff style commands. I picked what I thought the easiest to remember and to type on a phone keyboard methods of composing my posts would be. Basically you have markdown style inline formatting for bold, italic, code and *roff style formatting for more block level stuff. As a general rule: .foo creates <foo> and you need to explicitly close your ./foo. 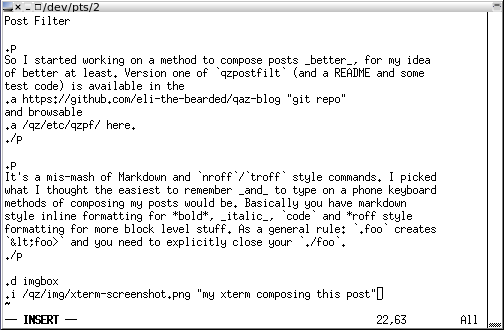 It ends up looking more like *roff than markdown.

I see this as the first step towards a composing tool. I'll also need a CGI wrapper for phone use and a command line wrapper to help with tags. As of today, it's more of a :% !qzpostfilt in vi sort of thing.

Also in blosxom blog news, I've changed the html flavor templates slightly and made changes to the CSS file mostly to better support reading on small screens, but also for a <ul> class to use in recipe posts.

Lastly, I added another two dozen logos to the mix. Previously there had been 146, so it's up to 170 now. I don't recall how I created the first logos, this time my method was to type "QZ" in libreoffice, change the font size to 180, and then go through the fonts I have installed, screenshotting all the interesting ones. I next very roughly cropped the images so that each QZ was alone on a white background. From there I started scripting the work.

(That's something I need to add to qzpostfilt: a <pre> handler. Todo. Hand fix for now.)