I saw someone else's teeny press project and was inspired. The design is interesting. Brian Cook's is a simple fold down frame and matching rubber stamps. Pluses: easy to get good registration, simple design and construction. But I can see room for improvement. Minuses: fixed size/shape block, fixed size shape paper, hand-pressed rubber stamps are hard to evenly press. 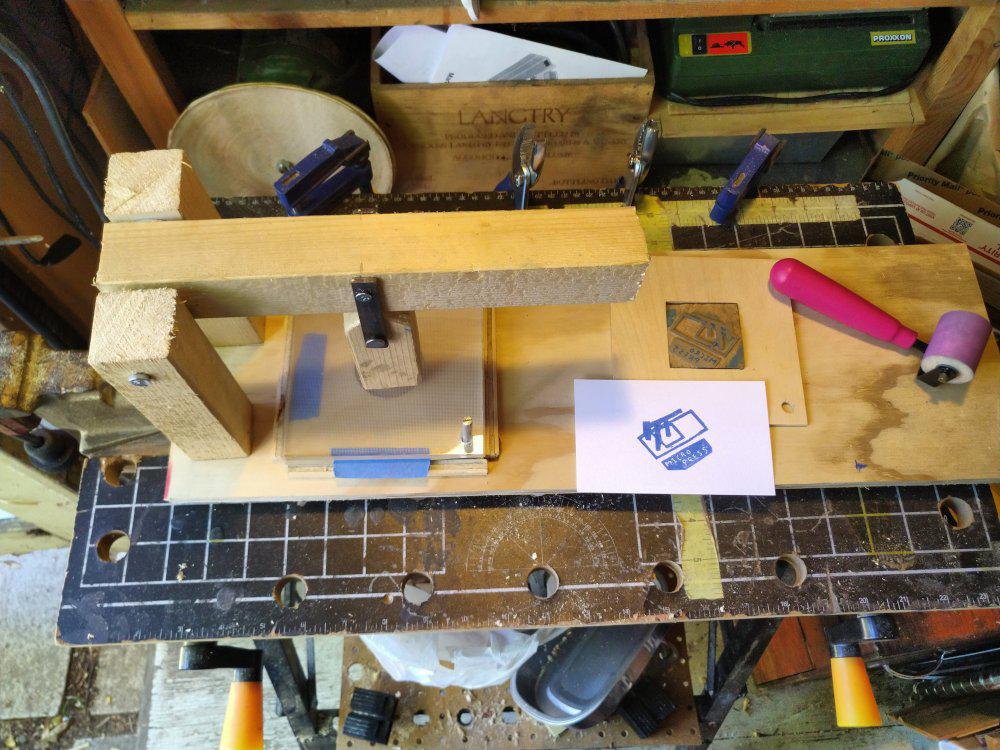 Modeled after a torilla press, I can get a lot of evenly distributed pressure. I made this using only materials I had laying around. There is a scrap of plywood for the base, and smaller scraps to hold the platen. Pine 2x2 for the press part, with 1/4" bolts screwed up from the underside. The main hinge on the lever is a bit of steel rod, the smaller plunger hinge is made from a large nail.

The platen ("flat plate of a printing press that presses the paper against the type") is some thick plastic I cut into 5" squares. The plastic came from an old combination scanner/printer. It seems to be optical polycarbonate with a fine grid printed on it. Very strong, very clear, very hard, very flat. Somewhat tricky to work with. Tools can melt it and then have the molten plastic move to a cooler spot and where the plastic suddenly hardens again. It seized up a drillbit for me, for example.

I have two bolts there for alignment, not support. The stack here is 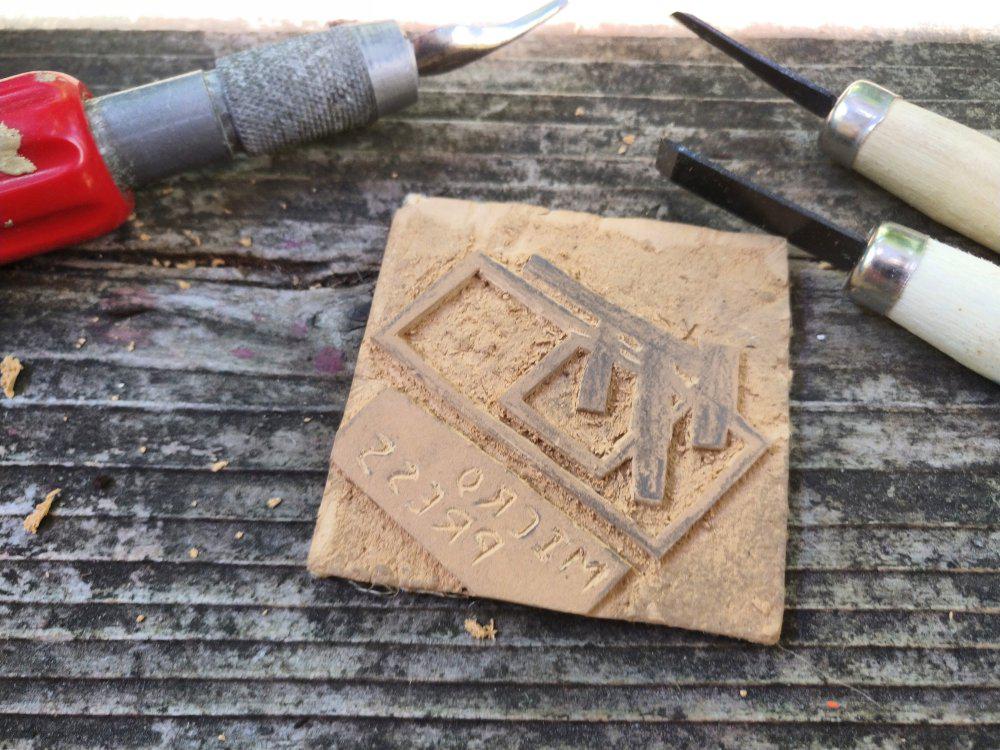 I have a lot of small chisels for lino work. None are great, but I'm not a great artist either. I decided on a simple rendition of the press itself for the first print (above). There's something satisfying in linoleum carving I find. Like Brian Cook's press, this is a two inch square. Unlike his, my press can accomodate other (small) sizes and shapes. 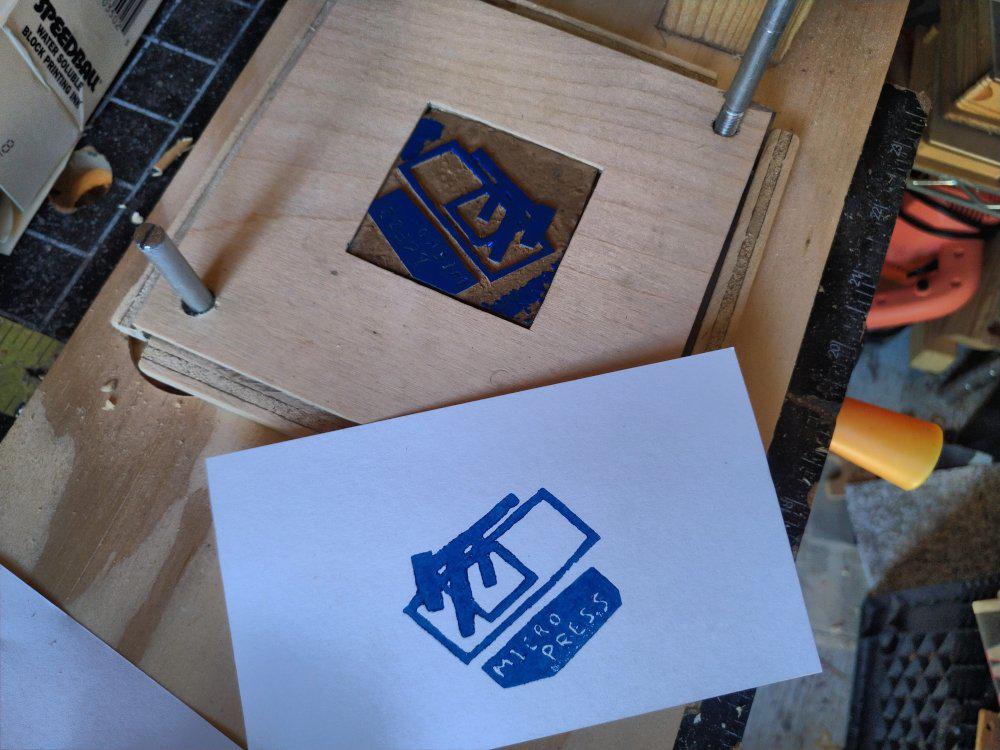 Pretty successful. The letters didn't come out as clearly as I'd like. My smallest chisels don't seem sharp or fine enough to do lines that small. 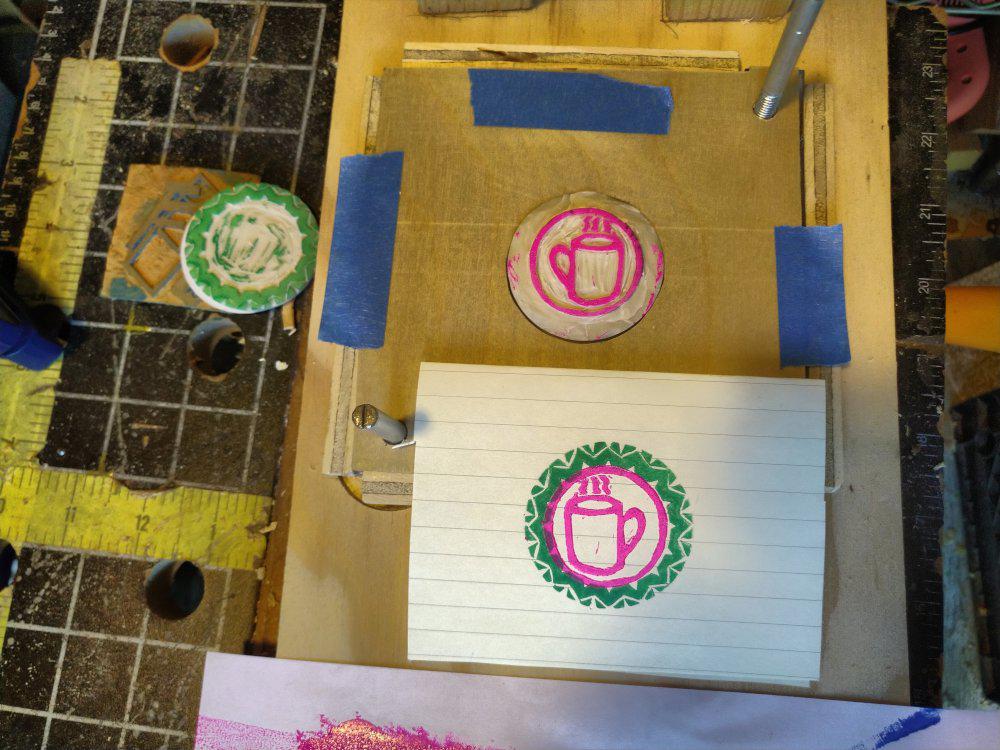 Here's an example of moving away from the two inch square, here with 45mm circular blocks.

I have two multipacks of these plastic linoleum substitute printing discs, purchased on a whim some years ago. The idea behind them is to make stamps with a special handle. I don't have the handle. These are not satisfying to carve. The print surface is smooth and firm, then it gets softer in the middle, with a rough backside coated with adhesive. The material is harder to cut than real lino. The adhesive to attach (it to the handle) is strong enough to be annoying but not strong enough to be effective.

I carved a border first (the green) then a second disc with an image. I didn't print the border onto the second, but did attempt to measure how much space I needed. It seems like I should use a more accurate system.

Overall, I'd say the press is pretty effective, and meets the goals I had in mind when I started. After using it I find that it is very easy to get a nice even pressing of the block into the paper, paper alignment (registration) works pretty well, and making new frames is pretty easy. It does have the drawback that it's somewhat slow and cumbersome to ink-up and swap paper. I hadn't given that enough thought during the design. Still, it works and cost me nothing.


Before Covid-19 reared it's head, my wife took out a lease on what we're calling the shop-factory. For the past decade she has made money selling patterns and teaching people knitting and sewing. The space is a former cleaners. With some cleaning, and a few repairs, it was mostly suitable. Except the bathroom. That needed a lot of work.

Most of the business has been sewing patterns in the last three years. Giant pieces of osper that need to be folded to fit in a 6"x8" and booklets with instructions to be printed, folded, and stapled. Then put in a folder and taped shut for ssle.

The idea is the shop-factory would be a place to manage her business from — instead of using a room of our house — and also be a place she could teach classes. A big table for folding patterns. A row of small tables for sewing machines for students. Shelves to hold all the business consumables. A bathroom students to use, with space to change. A large mirror for seeing how garments, once made, look.

Covid-19 has put a damper on treaching classes, for sure. And shelter-in-place has interrupted preparing the space. We took the sink and vinyl floor out of the bathroom in March and then it was nothing happening for so long. Finally, Memorial Day weekend we made progress. Started with taking the toilet out. Then putting down a moisture barrier. Then tiling. Then grouting. Finally cleaning up. 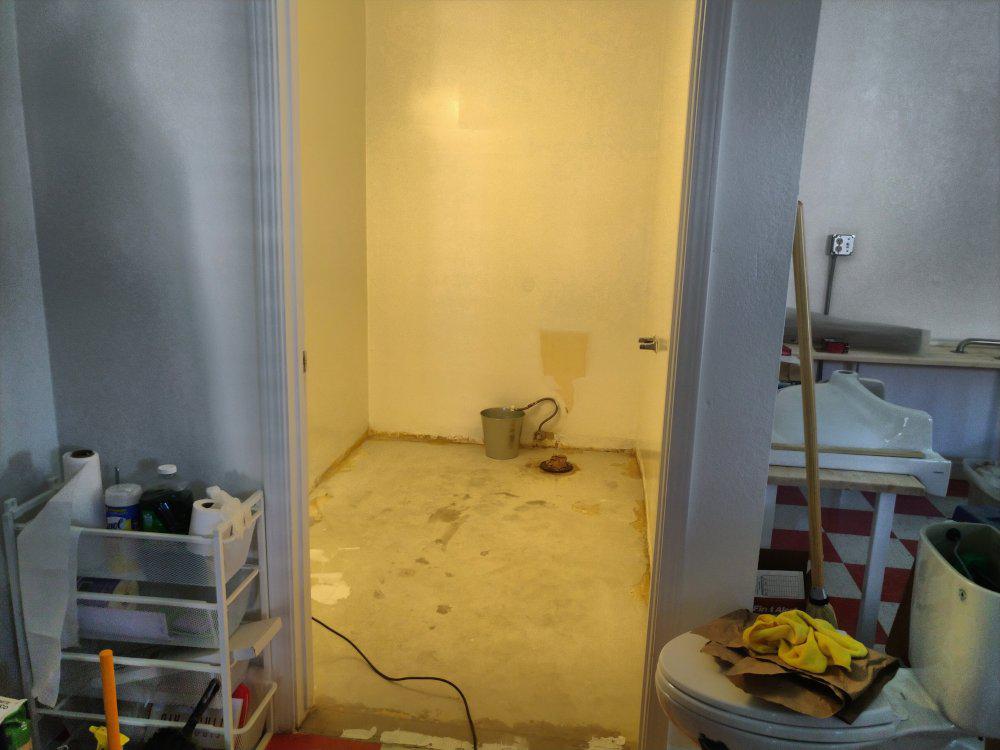 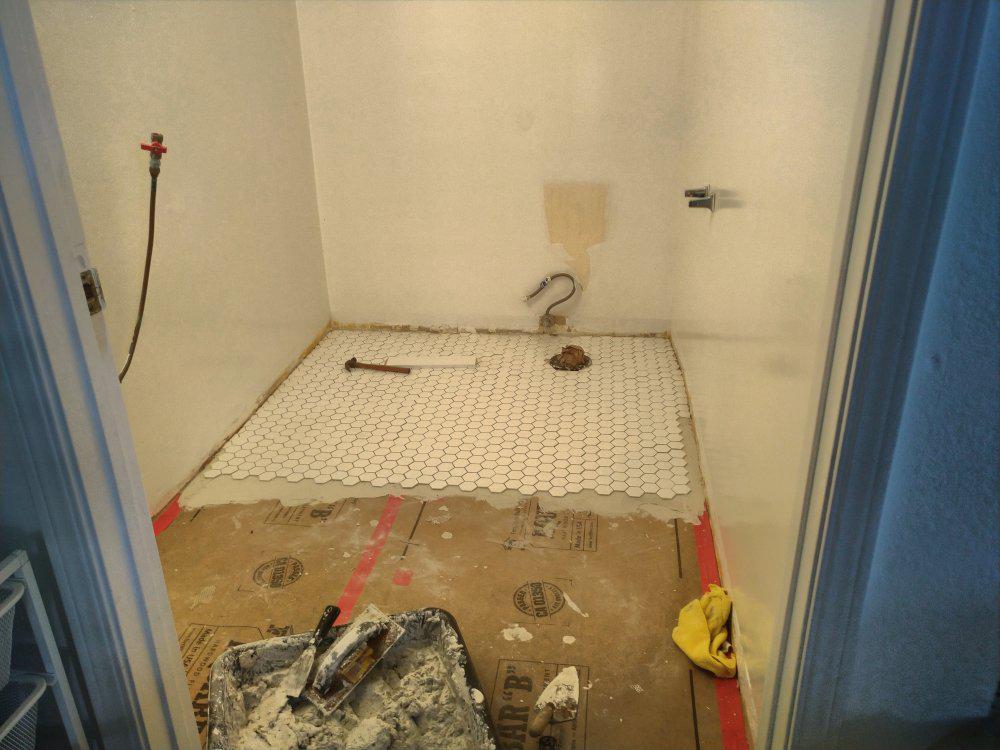 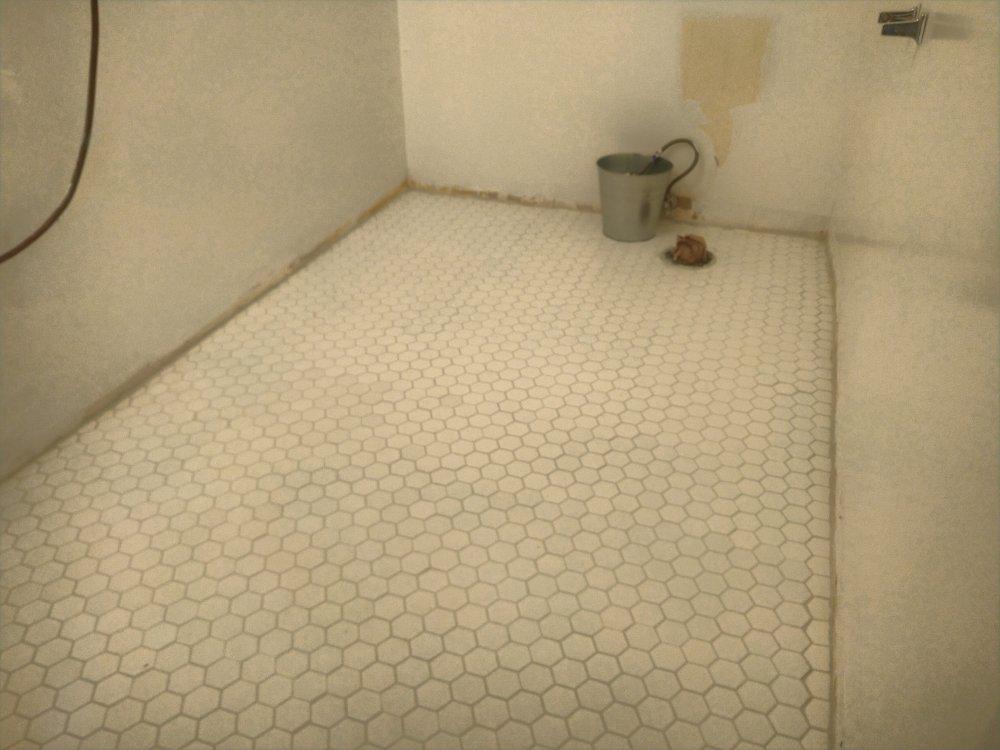 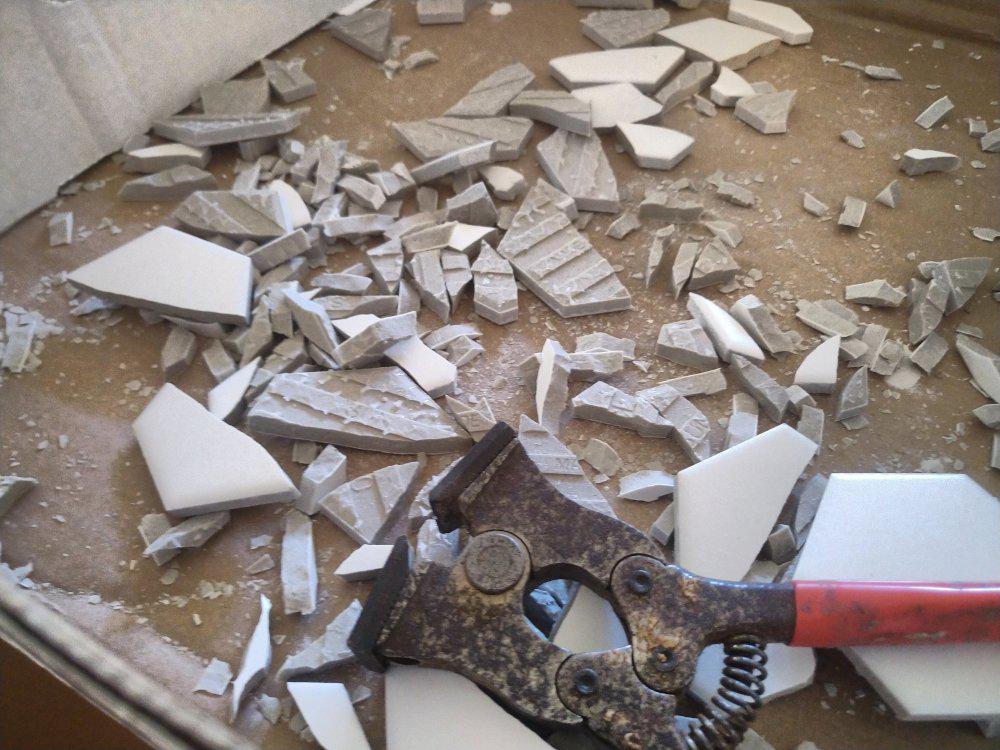 
My desk at $WORK is small, with a large monitor taking up a lot of the space. And it is a motorized sit/stand desk with no real options for drawers or shelves. But I want to keep some small amounts of desk things in drawers. So I designed a small set to fit the space.

Short enough to fit under the monitor, with something on top of it, legs tall enough to have computer cables run underneath it, big enough to hold a note pad and paper clips, made of thin wood to not take up more space than necessary.

I made the drawers out of wood I had on hand. The drawers are a little crude. I mitered the edges of four sides and the bottom and glued them together with some square profile pieces reinforcing all of the joins. In retrospect I should have used triangle profile and neater joins for the reinforcing bits. I glued some button plugs on for pulls.

Those completed, I purchased some 3mm thick plywood for the case. Then Covid-19 hit.

My monitor is still on my desk at work, but I'm never in the office anymore. My home desk has ample shelves around it, and room to attach a drawer to the underside, if I wanted.

So the project went on hold.

But recently I returned to it. 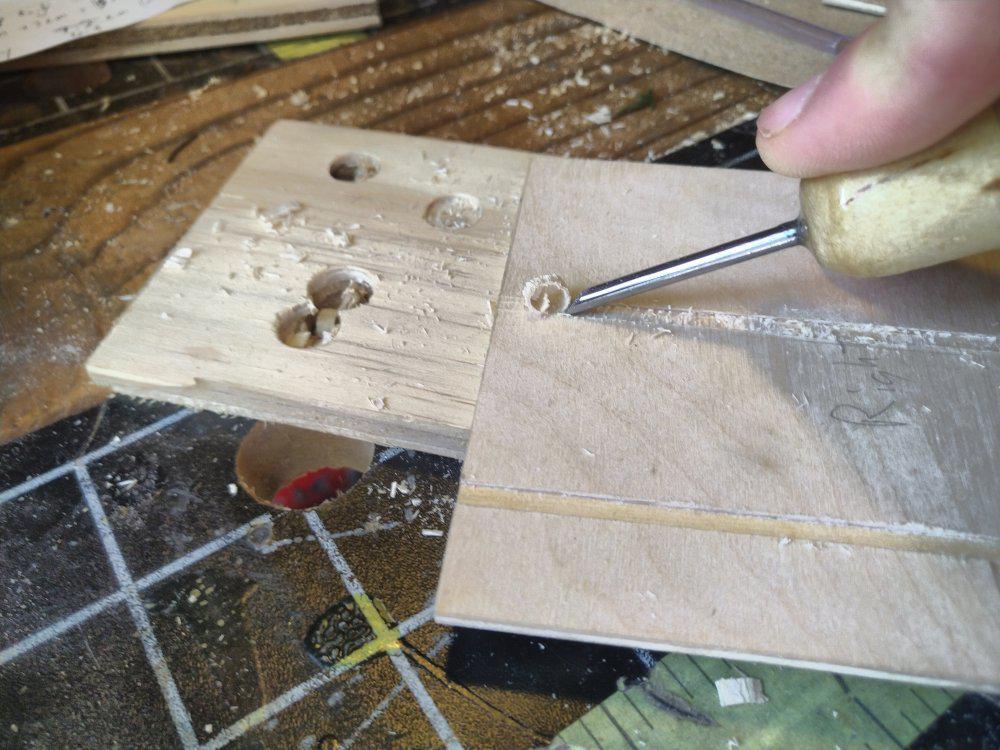 For the sides, I measured, scored with a box cutter, then chiseled out dados for each of the horizontal pieces (top, middle, bottom). The chisel is a tungsten carbide one I made myself following how-to-guides by Patrick Sullivan on youtube. 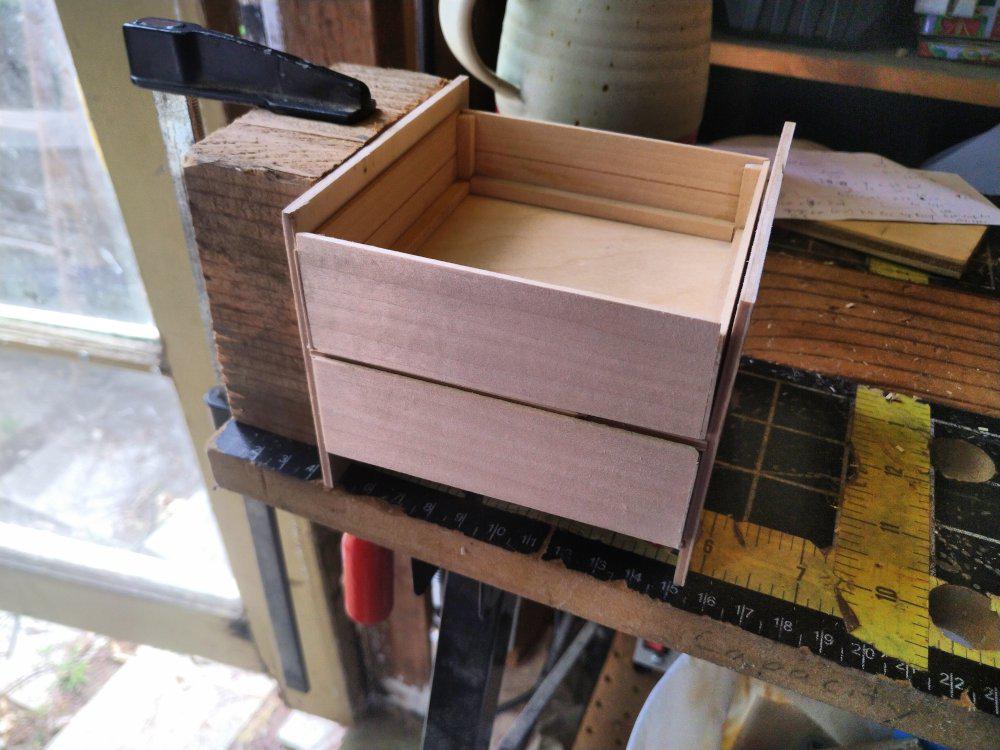 I started with the bottom shelf, then loose fit the pieces together, put a drawer on it and measured for the middle, then did it again for the top. Here's the project at that stage. 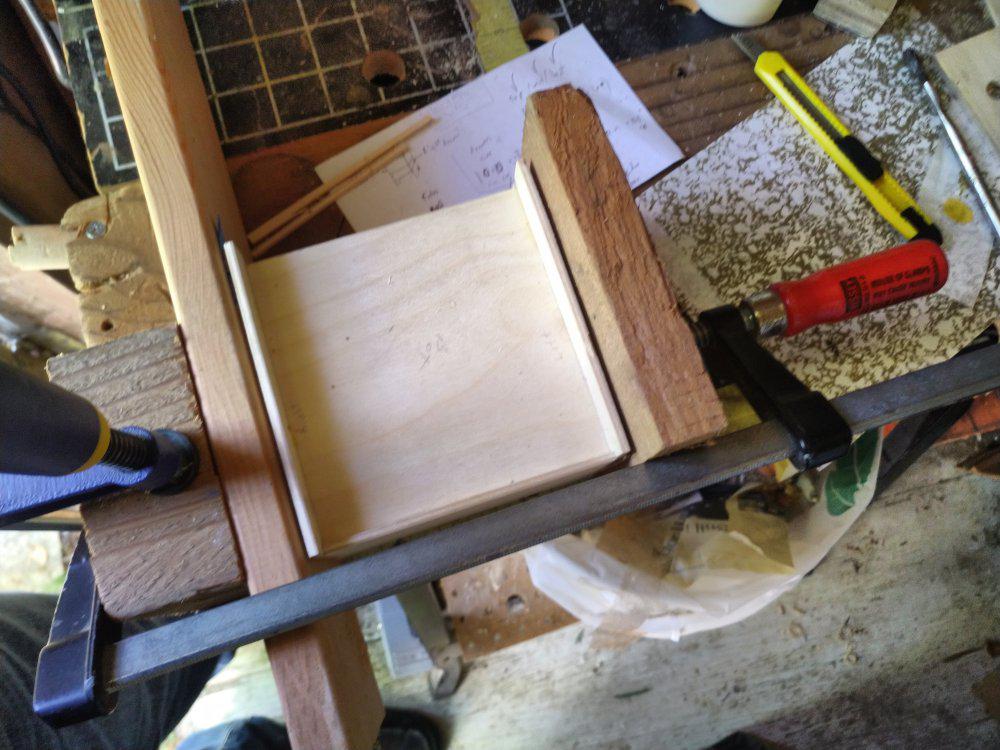 For the glue-up, I clamped a piece of scrap to my work table, then clamped the box between more scrap to that piece. Towards the end of the project I decided it would look good to have cork sides, for a micro pin board. I glued those on similarly. 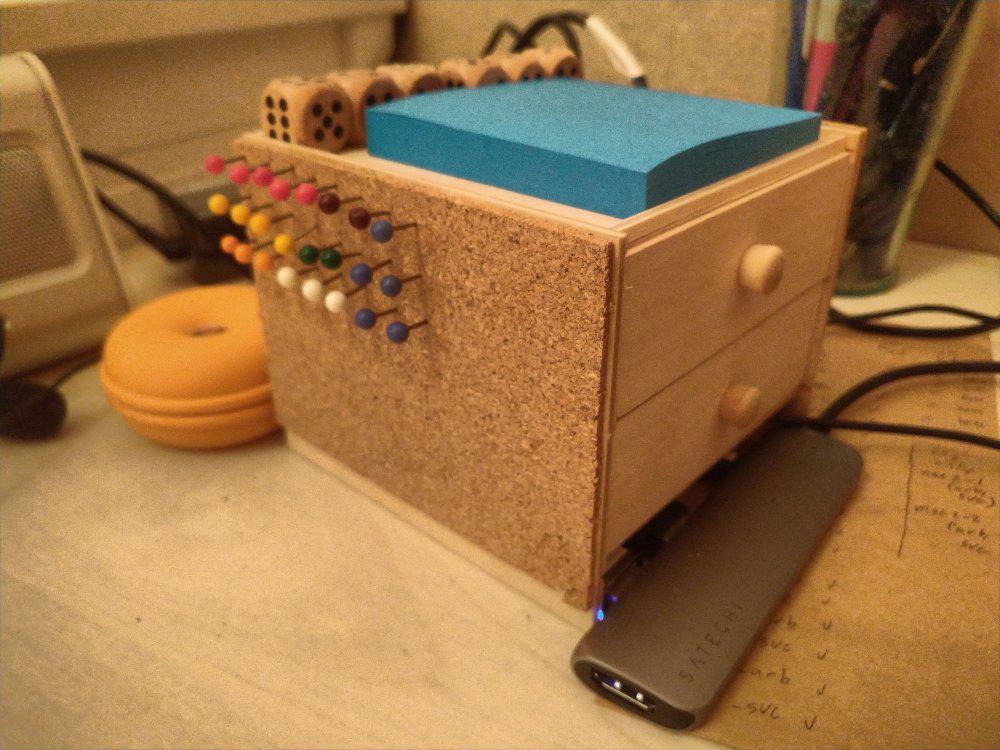 Here it is completed, on my home desk. At home, I run the cables out of the left side of the computer, at $WORK, the right. Just what's better for the power location. It fits a post-it pad and some dice on top. The smallest pins I could find are map tacks, but they are still a bit long for the shallow cork. I waxed the bottoms and sides of the drawers for smoother operation. Otherwise, the wood is unfinished.


Justine Haupt has built a very impressive rotary cellphone for herself. It's stunning. Impressive. Clever.

And not at all what I want in a phone.

For years I avoided getting a "smart" phone and made do with the low-end of the market. A Nokia slab. An Audiovox flip phone that would not die, but was carrier locked. A Samsung flip phone that I could use on the "family plan".

I never found the phone I really wanted. I still haven't seen it. But I did find a phone that I found really cool. And I got that.

What I want from a phone is basically extreme rugged construction plus fully open source, and upon seeing Ms Haupt's work I feel I should also add in "and gives me a decent Unix shell". I experimented with a Firefox Phone as a wifi-only device. It was okay software-wise, but clearly needed more work. Hardware-wise, that was junk. At the time I had that, I also hadn't realized the sheer joy of a portable Unix.

I haven't tried Pinephone or Librem. I do have another product from Pine64 and the Venn diagram of rugged and Pine64 appears to be two non-overlapping circles. To them low price trumps rugged everyday. I can see where their coming from, but it is not going in my pocket — it will be destroyed.

Librem is more interesting. They clearly don't care about weight or price, so there's a chance it's got some ruggedness. The price is still too dear for me to buy as a play-with-whim, but I'm interested.

So what did I get? I got a Cat. Specifically an S60, with the built-in FLIR thermal camera. And then about two years later replaced it with an S61, which has built-in FLIR thermal camera, a volatile organtic chemical (VOC) sensor, and a laser tape measure. I don't use the tape measure much, but I do track air quality with it. My big complaint is VOCs are only part of air quality: there's particulate matter (notably from wildfire smoke) and ozone, which I find fairly unpleasant. But I've often wondered about how high the ozone has to be before I notice.

And on those Cat Phones, I've installed Termux. I love being able to compile and run new software on my phone, even if I don't actually develop much on the device. I've mostly written shell and Perl scripts on the go, but I did get trn4 working, which involved some C hacking. One of the trickiest parts of getting the heir of Larry Wall's rn news reader running was the very deep assumption Wall made in thinking /bin/sh will always exist, even if the features it has may very. Termux has sh, but it's in a different directory... There were a few other issues like passwd files not existing, but they were easy fixes in the C. That code is very rugged against missing things on the system and is, eg, fully prepared to deal with getpwent() doing something useless. I just had to make it not call getpwent() at all.

But yeah, a rugged always connected Unix (and Linux is fine, but not the only thing I'd accept) device, probably with an okay camera, that maybe could also take calls that fits in my pocket. That's what I want. A rugged device that makes phone calls and not much else, no, cool as it is, no.