As in tools for web server logs, not the web logs commonly called "blogs".

In the early 2000s, I was doing a lot of very specific log analysis. At the time I was "webmaster" for a site with ads. To justify ad sales, the company paid for a web server log audit service. This provided the main log reports looked at by the company, but sometimes I'd be called on to explain things. So I had to dive into the logs and examine them myself.

Enter logprint. Today this tool is not going to be widely useful, instead people will use an ELK stack and define a grok rule in the logstash part of ELK. But initial release of logstash was 2010, long after I wrote logprint.

What logprint does is parse log files of various formats — I defined four that I've had to work with, adding more is an excerise regular expression writing, same as with grok — into columns. Some of those columns can be sub-parsed. For example, the Apache request line column can be broken down into a method ("GET", "POST", "HEAD", etc), a URI (the actual requested resource) and an optional protocol (not present for HTTP 0.9 or present as "HTTP/1.0" or "HTTP/1.1"). After parsing the line, it can be filtered: only consider requests that succeeded (2xx), and were over 200,000 bytes; then selectively print some of the columns for that entry, say date, referer, URI.

Things like parsing the file part into URI when you get a request with the full URL on the GET line is an unusual need, but I needed it then and it is still useful now. The same parsing rules for a full URL there are also available for parsing Referer: headers, which was once useful for pulling out search terms used from referring search engines.

That gets output like this (although this was sorted):

So simple to see where the bytes are coming from. Looking at that, I decied I really should better compress the "apple-touch-icon.png". I'm not sure I can get "faveicon.ico" smaller, at least not with the features it has now. And the CSS and other icons in /i/ also got some compression.

Then I looked at bytes per day to see if adding a sitemap helped. It does, but the difference is slight, easy to lose in the weekly cycle. Usage really picked up in April, didn't it? 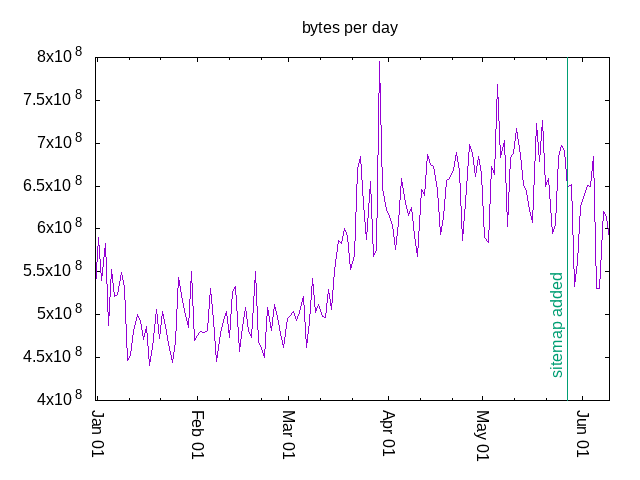 And graphed with gnuplot

So I'm publishing these log tool scripts for anyone interested in similar simple log slicing and dicing. It's not awstats or webalizer but it's not trying to be either.