Inspired by someone else's tale of "adopting" a Unicode character, I looked at the "adoption" form yesterday and decided that I could easily afford the low-end "bronze" level for U+2417 SYMBOL FOR END OF TRANSMISSION BLOCK, the icon for ASCII character 0x17 END OF TRANSMISSION BLOCK, commonly called ETB. The shared initials with "Eli the Bearded" attracted me to those pair of characters, one of which has a symbol that shows those initials. 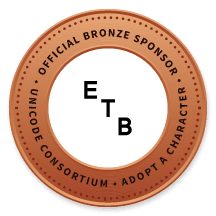 I've had a fondness for Unicode in general for years which is how I ended up writing my Unicode Toys, first the grep tool to explore the characters and see them, then show tool to identify characters found in the wild, and after that the rest of them. The convert tool is the one that has attracted the most attention. It does real and toy shifts of characters to other parts of Unicode.

I have mixed feelings about that one. The converter is a fun toy, but also sadly somewhat overused. Because the characters have meanings besides their appearance, using them for for their appearance alone ends up being a huge accessibility barrier. The only conversions I use on a regular basis are the the fraction maker to access the super and subscripts and vulgar fractions plus the Braille converter.