I first had email, and first saw a :-) smiley face in 1990. It was about that time, also, that I was exposed to concrete poetry. Both the smiley and the pictures of words poetry were influential on my mind.

I've had a long lasting love of ASCII art and things near to it since. The first program I saw that could create ASCII art from another image was pbmtoascii from the netpnm package. It worked, but it was kinda disappointing. I had seen, and even made myself, hand drawn ASCII art that was much better than the output of that tool.

Eventually I learned there is a higher quality option to the program.

But that still seemed lack luster to me. About 21 years ago, the date I have in the file is 27 Dec 1999, I wrote my own tool that turns gray scale ("pgm") images instead of bitmap ("pbm") images into ASCII art.

Later I did things like convert ASCII art back into images in various ways. asciiversion2color is not a great program (and didn't even work for me today, because pamarith has been is named pnmarith on this system, a hazard of the netpbm tools being old and reaching different places from different paths, but when I did git it working: 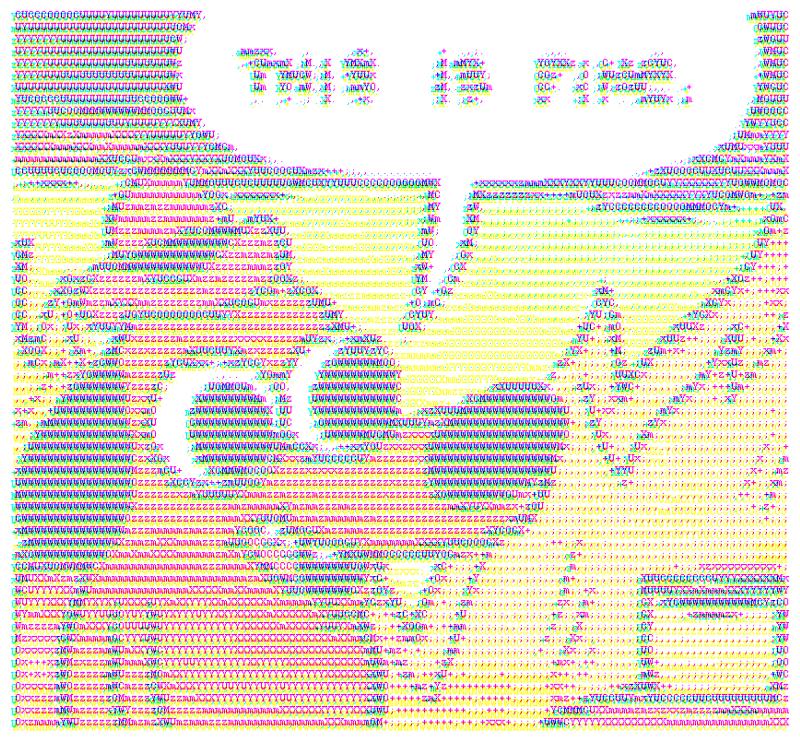 asciiversion2color creates three pbmascii images, one for each RGB channel (in the "ppm" pixmap), converts the ASCII to text-in-image form, then combines the three with a slight offset.

And texttopnm lets you specify an arbitrary tile for each character, as a way of introducing fonts. It has some code for UTF-8 fonts, but I've mostly used it with historic fonts. 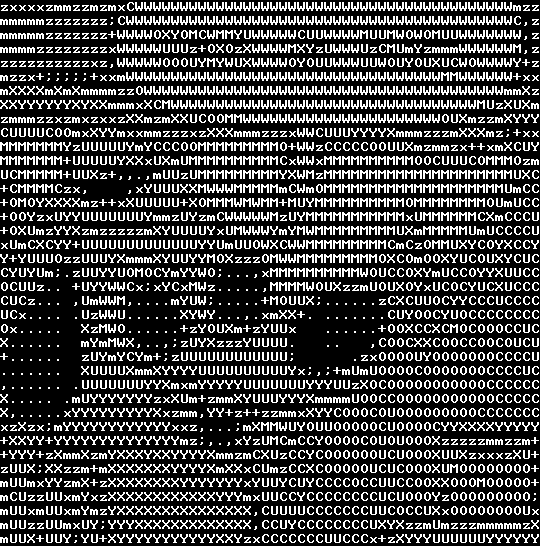 The 9x14 font is the IBM Monochrome Display Adapter hardware font from circa 1981. Quoting Wikipedia:

Each character is rendered in a box of 9×14 pixels, of which 7×11 depicts the character itself and the other pixels provide space between character columns and lines. [...] Each character cell can be set to one of 256 bitmap characters stored in ROM on the card, and this character set cannot be altered from the built-in hardware code page 437. The only way to simulate "graphics" is through ASCII art.

Most recently, I found someone else's code that was created for emulating monochrome bitmap graphics using Braille characters in Unicode in terminal windows. I loved it immediately, and forked it to add a pbmtodots still image converter.

It's no longer ASCII art, by a long strech, but it's very clearly identifiable in a modern text window.


A discussion in the Usenet group comp.sys.raspberry-pi about browsers turned to ASCII art when I brought up concerns about showing ASCII art in web pages (based on the recent notint screenshots here). And that discussion had one Charlie Gibbs reminisce about the "Andalusian Video Snail".

I found the file for him at https://grox.net/misc/vt/ — it's an ASCII art animation with VT100 escape codes so viewing it is tricky. Those animations are typically highly dependent on viewing on slow terminals, and modern hardware is anything but a slow terminal.

At grox.net there is also a slowcat.c which easily compiles. That code is essentially a loop of getchar();nanosleep();putchar(); to delay output. It worked okay for a few videos I tried, but the snails did not look so good. And it would not slow down STDIN, which would be handy for a program I wrote (more later).

So the biggest problem with the Grox slowcat.c is while it adds delays, it doesn't disable output buffering, so output ends up being large chunks showed without delay and then a delay for the next large chunk. That doesn't suit that particular animation well. Other problems include a "cat" that only shows exactly one file instead of arbitrary numbers, an awkward interface for delays (how many nanoseconds do I really want? and why does the code use usecs for presumably μseconds), and arg parsing oddness.

I decided to rewrite slowcat. I disabled buffering, switched to usleep(), employ getopt() and an arbitrary number of files, and added a option to have the program calculate a delay to emulate a particular baud rate, which is how terminal speeds were measured when these were written. Quite likely a baud of 1200 or 9600 was assumed by the animator. Baud is a measure of bits per second, so 9600 works out to 150 characters per second, or about 13 seconds for an 80x24 terminal screen. When I test time slocat -b 9600 snails.tv takes 3m33.23s while time cat snails.tv takes 0.47s. On my system stty tells me 38400 baud, which would be 4 times faster, but since it actually runs 453(ish) times faster, the baud equivalent is closer to 4,500,000 than 38,400. For most purposes, that faster speed is much appreciated.

So back to signature.c, by which I mean this program:

I use it in place of a .signature on select Usenet posts. I wrote it approximately 1995. Over the years, it's been used perhaps one or two dozen times, and I have made at least five variants with different email addresses, each of which has been reformated to have the lines the same length.

(An aside on .signatures: I have never used a proper .signature, that is to say a block of standard text appeneded automatically to the end of my posts or email. I have always done it manually, and, for Usenet posts, 99.9% of them are unique entries composed for that particular post. I have about 30 programs, most in Perl, that I have used and reused from time to time. Since I don't consider them true signatures, and do consider them part of the post, I do not use proper signature cut lines — dash dash space on a line by itself — which annoys some people, sometimes.)

The origins of that program are interesting. The program came to me in a dream where I visualized an ASCII art movie of cross-sections of a sphere that changes "color" closer to the core. The colors are represented by the characters in the string ".,:;iIJYVSOM" and the code uses some basic IOCCC obfuscation tricks, like using C arrays backwards: (offset)["array to index"], but is mostly pretty readable once reformatted. The use of +++ is very classic me, since I enjoy testing how far I can push a parser to accept the same character over and over. My extreme is perhaps this Perl one:

Five ampersands in a row, then a space because the parser choked on ampersand six. s&&& runs a substitution using the previous regexp, so the RE field between s& and the middle & is empty and replaces the match with an empty string, the middle & and third &. If that succeeds (&&) call subroutine s: &s. I needed a space on either side of the && and operator as a hint to the parser about what's going on, and I choose to go with after to get five in a row. Then I squeeze as many extra ampersands as I can in the rest of that line. I'm pleased to say that since I wrote that, the Perl parser has improved to the point that the six ampersand in a row version now works: a fragment like (s&&&&&&s( is either a nightmare or a wonderous sight depending on your tastes.

But I digress. The dream version of sphere.c did not include the use of the number 28319377 to represent "Elijah" printed on every frame, I added that when I decided that sphere.c should become signature.c. It's obfuscated enough that the average schmoe won't be able to change it, but could perhaps remove it.

But like those other ASCII art movies, signature suffered from the speed-up of terminals. The visualization cannot be appreciated at such lightning rates. The fix to have slowcat work on STDIN was added with my signature program in mind: signature | slowcat -b 9600

My slowcat and the latest version of signature.c, now fixed to have a more circular sphere, are available at github, along with various animations (the animations from grox.net and textfiles.com).