Man on Wire and The Walk


I rewatched Man on Wire (currently streaming on Netflix) and then went out to see The Walk in "Imax 3D".

This is a charming and engaging documentary about the tightrope (er, wire) walker Philippe Petit. A Frenchman with a passion for heights, he pulls some stunts putting up wires in public places, eg, Notre Dame and Sydney Harbor Bridge, then walking on them for a while before getting arrested. But then he learns that the towers of the World Trade Center have been finished, and what purpose could those have been built for but to let Philippe run his cable and walk on top of the world....

There is much about the planning of this undertaking (you need a lot of heavy wire for the "rope", and how do get it across that chasm?) with modern interviews with participants and recreated scenes. The end is probbably not a surprize to anyone, so I'll let slip that the title comes from the desciption of the crime in the police report.

Petit's worst luck was the date, which had more newsworthy events.

Both concern Philippe Petit's ambitious goal to high-wire walk between the towers of the World Trade Center, a plan that starts to form in his mind before construction begins. Man on Wire is a documentary that ends with the event. The Walk is a recreation that puts a lot less emphasis on the preparation and a lot more on the actualization. Instead of seeing how many times Philippe flies across the world, to practice on the Sydney Harbor Bridge, or to study things at the site in Manhattan and then practice in a carefully measured out space in a field in France, that is largely compressed. Instead we watch them sneaking the supplies into the building, hiding from the guards, attaching the cables (main and stabilizers), and the Walk.

The camera follows Philippe out over the Void, looking down that vast distance, too far to even register in the 3D projection, and follows him as he walks back and forth, teasingly avoids the cops at either end, and puts his show 1300' in the air.

I've read that some people have felt vertigo and nausea watching this, but I did not feel anything approaching that. The projection was pretty sharp for 3D, in close-ups of Joseph Gordon-Levitt's face, I could see that he was wearing contacts, but the most I was jolted was an early scene where a young Philippe has a rope snap on him. That incident prompts him to seek lessons from a professional, Papa Rudy, who is not in the documentary.

Apparently Philippe taught Gordon-Levitt to tight-rope walk for the film. In the time he spends walking for the camera, Gordon-Levitt looks a total natural. Clearly it was a casting / teaching job well done.

This is a documentary that does not even show a photo of the person named in the title. Bill Watterson is a very private person who does not want to give interviews, do publicity photos, have people paying attention to him. Mr Watterson is, of course, the man who created, wrote, drew, and finally ended "Calvin and Hobbes" after some 3000 strips.

The guy making this film knows he has no chance of getting Mr. Watterson to talk to him and he doesn't try. Instead he tries to determine what has made the comic so endearing and enduring. In some ways this is a love letter to the strip, to the man behind strip. In some ways this 90 minute documentary is too long.

But he does get a lot of interviews with people who are interesting to listen to: Bill Amend, Stephen Pastis, the widow of Charles Shultz, the guy who represented the comic at the syndicate, Berkeley Breathed, Hillary Price, and a few other comic artists. People who were affected professionally by by the strip.

No one here has a bad thing to say about "Calvin and Hobbes" and few say much bad about Bill Watterson. It's a very feel good look at a comic that was (mostly) a be funny every day strip. The most anyone can say about why it has aged so well is the timelessness of the material and the quality of the art. Some argument is made that the purity of the no licensing decisions helps its legacy but some argument to the contrary is also presented.

It's a pleasant way to spend an hour and a half, but it won't change your life: three panels out of four, on a Saturday strip.

Final thought: betting Jim Davis (of Garfield) might have bad opinions of "no licensing"


Beauty is Embarrassing is a documentary about artist Wayne White, perhaps best known for puppet design and work on the CBS show Pee Wee's Playhouse. The title comes from a piece White has done, and gets a thorough explanation late in the film.

Basically Wayne White is non-stop making stuff, much of it in a rough untutored style: cardboard, hot-melt glue, sticks found on the ground, scrap wood, other garbage. But some is highly skilled. And all of it comes from the radical notion that art should be fun.

One of the things he does for no apparent reason other than to have fun is make a giant carboard head / mask of Lyndon B Johnson and then wears it out in the world. He hands out cards asking people to elect him, dances, talks with passerbys.

The showing I went to had Wayne White in the theatre to introduce the film and answer questions after. Some bits I thought interesting from the "You got Q and I've got A" section:

Will he ever get tired of it and do something else? No, he's been drawing and painting since he was three and will never stop.

Will he be taking his word-in-landscape paintings to the next level? Yes, he's in negotiations to put words in the Tennessee mountains.

What's his ideal day? Get up at 7:30, walk the dog, have breakfast at 8 (yogurt and something else), paint until 2ish, smoke some weed, then paint until 7ish.

After "Why did you learn to play banjo?" He named two musicians I'm not going to remember. Then he talked about wanting to be different and everyone else picking up guitars. Then he mentioned it was 1977 and this album called "Never Mind the Bollocks, Here's the Sex Pistols" came out. According to White "Banjos are punk." He said "I don't have the banjo, but LBJ is in the lobby and will be posing for photos." 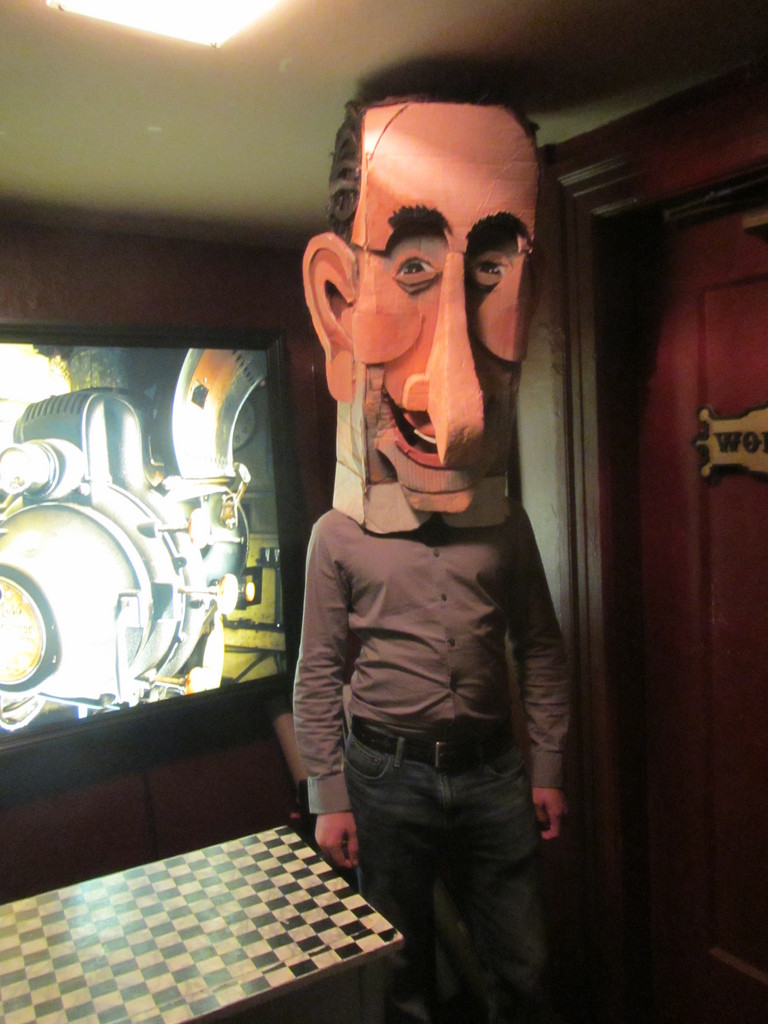 LBJ in the lobby.

Beauty is Embarrassing at IMDB

Final thought: film was at the Roxie in San Francisco because his wife asked them to show it


Being Elmo: A Puppetteer's Journey isn't the best made documentary of the year, but it's awful sweet and a nice behind-the-scenes look at Henson's work and legacy. I'd have appreciated more of the technical how-tos Kevin Clash explained he wanted to learn when he first visited Henson's workshop. And I couldn't help buy notice some of the video being reused later in the film. But Clash finding his way from ten-year-old making puppets from his dad's coat to becoming one of the major influences of Seasame Street, is heartwarming.

Four hands in a puppet out of five.

Being Elmo at IMDB

Final thought: first time in a long time seeing a movie shown with no trailers