When I was a kid, maybe twelve, I got a German made wind-up alarm clock, the type with the two bells on top and separate springs for the clock and the alarm. That was my "daily driver" of an alarm for a long time. After I married, my wife hated it because the ticking was "loud" when she was trying to get to sleep. When one of the springs finally broke, probably about 2005ish, I switched to using my cellphone as an alarm. Some Nokia brick. Eventually I switched to a Audiovox flip "feature" phone.

The Audiovox was Nokia quality indestructable. (But it was in many ways a terrible phone.) I used it as a phone for years and then when I finally upgraded, I continued to use the Audiovox as an alarm clock for some more years. I replaced it only in 2016.

On the Audiovox the alarm mode had three alarms that could be set, and then enabled or disabled. I found that three different wake-up times covered 90+% of my usage: wake up on a day when the kids have school, wake up on a day when I have work but the kids don't have school, and weekend. Then there would be 5 to 10% of the time when I'd need a special time for something.

So when it came to replacing it, I wanted an alarm clock that would give me three different standard times and one special, and I wanted an interface that could let me set a week of them at once. I turned to a "pocketCHIP" (hereafter Pocketchip) tiny portable computer. 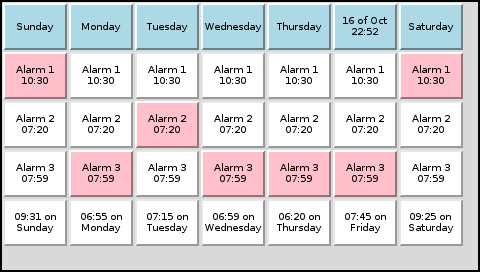 Pink buttons show alarms on, white ones show alarms off. The day of week button turns off all alarms for that day. Time of day is shown on the current day of week. Code available from my github page, it's Perl with Tk for the X11 UI.

The Chip was a $9 computer, the "Pocket" part was an attachment to add a keyboard, touchscreen, battery pack, headers for GPIO etc, and a small hacking space. Overall it cost about $60, which was (and is) a steal compared to what a Raspberry Pi outfited as a laptop / tablet / netbook / other portable computer costs. As of 2020, you can still find new-old-stock on ebay for $50ish. Unlike a Pi, Chip was low-res: no HDMI option; and has built-in wifi and bluetooth and built-in storage. Now Pocketchip isn't great, it's got a take-you-back-to-the-late-1980s pixel count (480x272), a painfully awkward keyboard, no built-in speakers, and poor audio volume from the audio jack.

I modified mine adding a basic mono amplifier (PAM8230 from Adafruit) and a speaker attached to that. I also connected one of the GPIO pins to a standard 1/8th inch (2.5mm) audio jack, to use with an external button. There was ample room in the case for the amp, speaker, and extra jack. I did need to cut the plastic a bit to get get the proper parts sticking out. 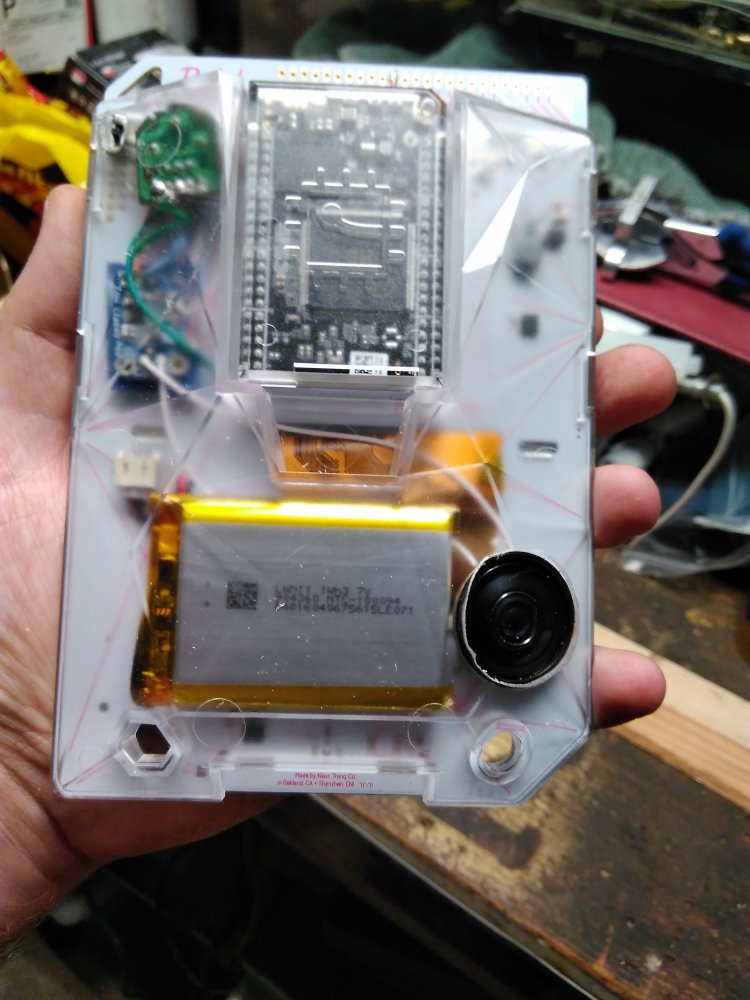 The green board in the upper left is for the GPIO 2.5mm jack, the blue board near it is the add-on amp, there's an on-off switch for the amp in the far upper left, and the speaker is squeezed in on the bottom right. The larger black board is the Chip $9 computer, and the silver thing below it is the rechargable battery.

Then I built a button out of a wooden box and Cherry D42 switch with a lever that I pulled out of some device. The lever holds the top of the box slightly open, pushing the lid down closes the switch. Big easy to push button for sleepy alarm silencing.

When the alarm fires, a program plays a sound file (repeatedly up to 30 times or 60 seconds as configured) and listens to a GPIO pin. Every 1/100th second the GPIO pin is sampled. With ten high samples and ten low samples — to allow for a switch normally open or normally closed — it decides that's enough and kills the sound playback and quits. 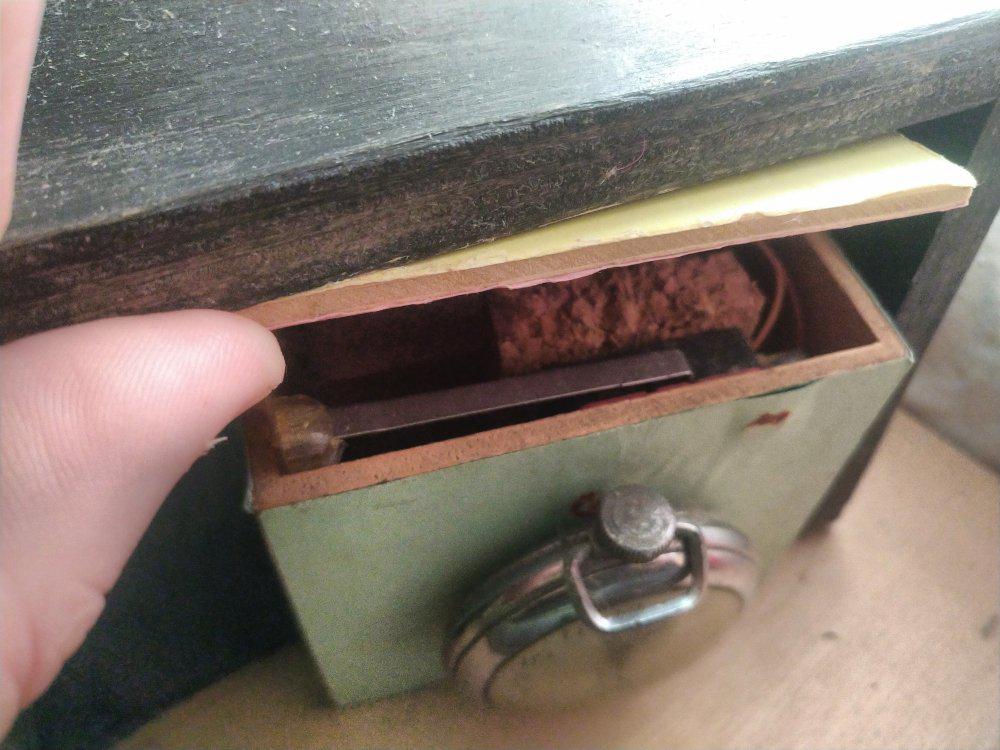 This part was made entirely with reused stuff I had laying around.

I wrote the alarm software sometime in 2016 and have made only slight modifications to it since then. It works, and it works well. When I built myself a new bedside table last year, I designed it to have a place for the Pocket chip to hang, and suitable space for all the wires. 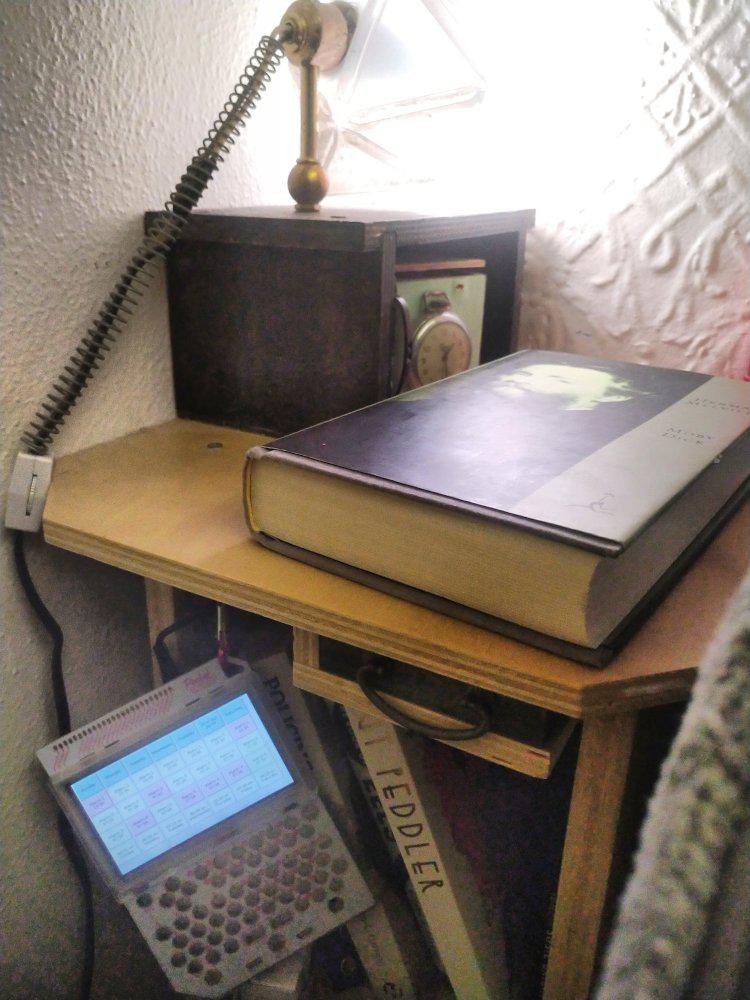 I made the lamp first, then the alarm button to fit under the lamp, then the table that this all lives on. The drawer holds pencils and bookmarks, the current night time reading is on the table, the next books to read on the first shelf, books done reading go on the shelf below that. All of this is from scavenged or left-over material.

As this setup gets long in the tooth, I'm starting to think about what I do next. In particular, I worry about the Chip failing and/or the battery becoming useless. I've been thinking it might make a good learn Arduino project. I'd prefer to spend less than $100 on all parts, have a system with at least the current capabilties, including normally plugged in but with at least an hour's backup power to ride out blackouts. And a screen that I can easily turn off for darkness. It's been fun browsing, but I don't have a parts list yet.