I've cooked a lot of pizza over the years. These day's I'm using the Ken Forkish Same Day Straight Pizza Dough recipe, but I was using a simpler one of my own for a while:

Mix the water, sugar, and yeast and set aside. Measure out 3 1/2 cups flour and mix in the salt. Pour in the oil and yeast water together, stir to a dough, and knead in more flour until it is not sticky, then knead some more. Pour some more oil in the bottom of a bowl, put the dough in and rotate to cover the dough surface with oil, cover with a damp cloth and put aside to rise. The oil, both in the dough and on the surface, and the damp cloth help a lot. Let rise a while, how long will depend on temperature, at least one hour but probably two, refrigerated it might take eight. Then divide in half and shape.

I developed that recipe after getting a pizza stone for Xmas in maybe 1997. The stone broke after three to five years and I got a better stone which is still going strong. Usually I preheat the oven as high as it will go and give the stone at least twenty minutes at that temperature to soak up heat. I generously use coarse corn meal (sometimes called "polenta") on the peel to keep the dough from sticking to the peel or the stone.

But today was not usual. Today it was very hot and I decided to try the barbecue grill method I've heard about. I have a propane BBQ with a cast iron grill that I cooked directly on. First off was an extra thorough cleaning of the grill, then preheating it. With a shaped but untopped round of pizza, put it directly on the metal grill and cook for two minutes. Then scrape it off, which was pretty easy. (I used a metal pizza peel, but spatulas would work.) Grill mark side up, top it, then return to the grill for five minutes. At this point the dough was cooked, but the cheese could have used a little more heat, so I finished it with a hand propane torch.

I have a trigger start propane torch that is intended to sit on top of a 14oz tank, Ace Trigger Start Torch, I've seen nearly the same used in commercial kitchens to cook meringue, so I don't have qualms about using it for food cooking. I just waved it back and forth until the cheese was nice and bubbly and it came out great.

I expect I'll be cooking pizza this way again. 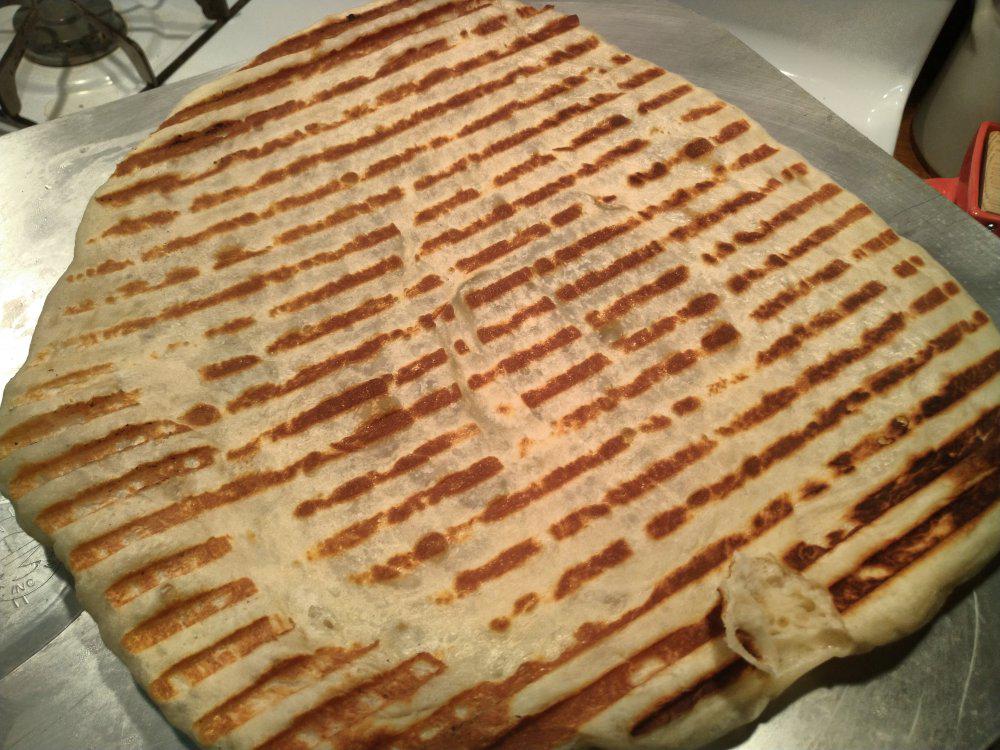 Off the grill with one side cooked, ready to be topped. The underside is slightly sticky, so be careful sliding it off. 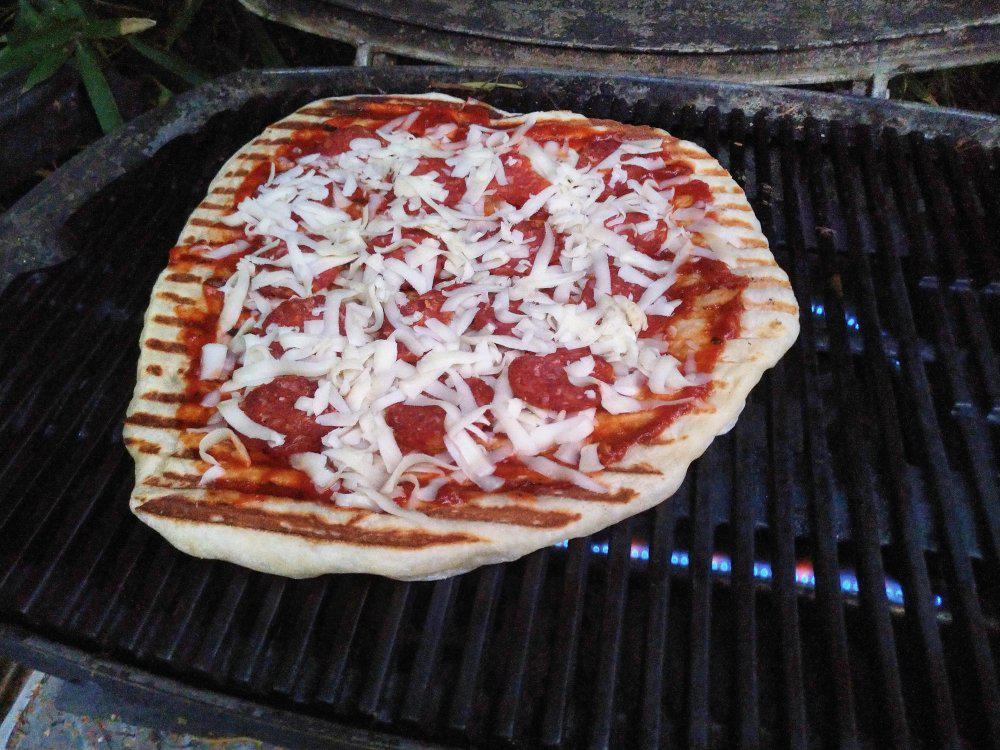 Back on the grill for some more cooking. I found gently lifting one side off the peel, pulling the peel out to the opposide of that, then dropping lifted part worked well. (I cooked it, both sides, with lid closed. 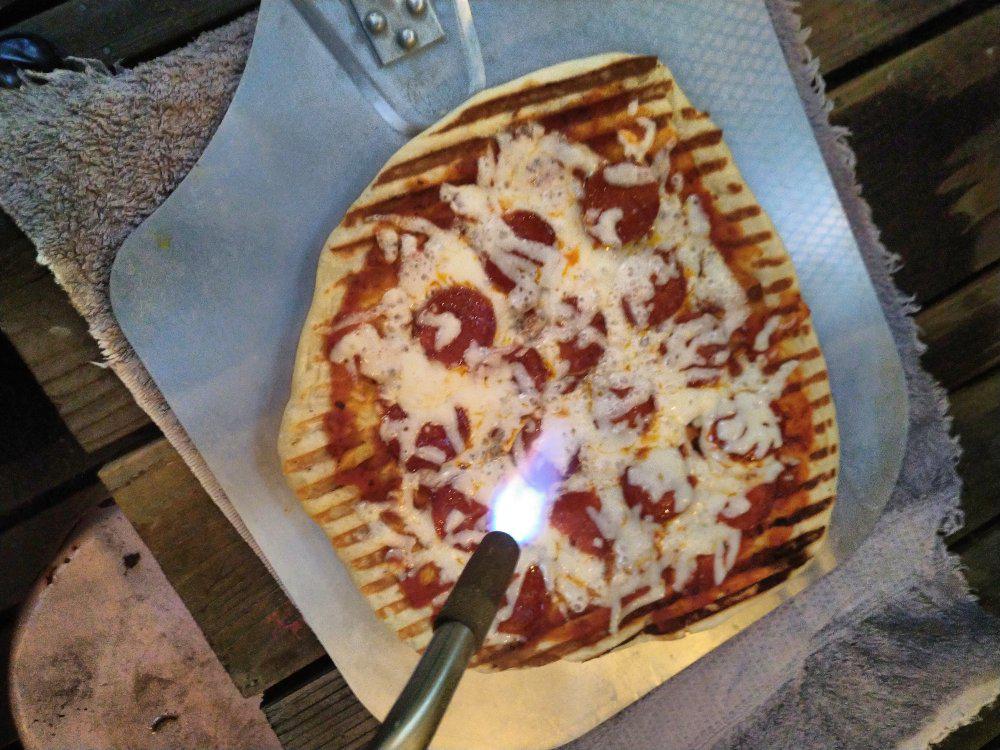 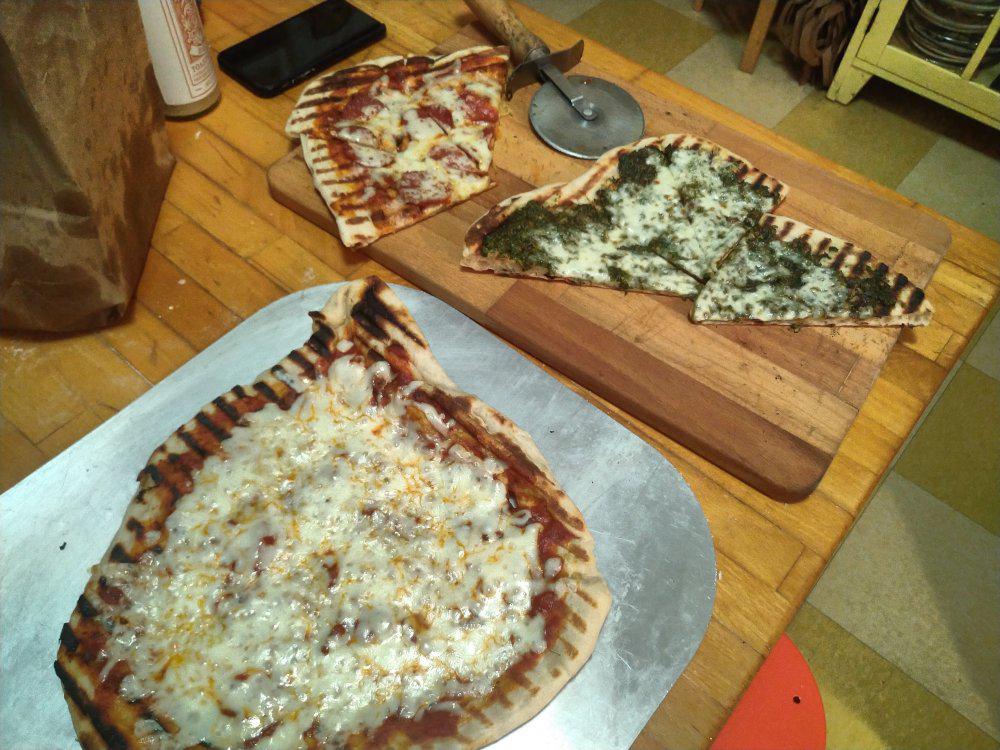 I made four pizzas, one completely consumed by the time this photo was taken. Two plain cheese, one pepperoni, and one pesto.

I also made, with leftover dough from the recipe, a BBQ focaccia (not pictured).