In the 1990s, I had an Apple Mac IIci with A/UX. Most of that is a story for another day. All I have left from that system are a few 3.5" (90 mm) floppy disks, a couple of CD-ROM with programs that run on multiple systems (eg, Infocom Games), and my magneto-optical stuff.

I had done my homework researching storage systems for backups. The best sources I had said that Zip drives were "bad", CD-R was "good", and magneto-optical (MO) was "archival". Zips were the cheapest drives of those, and CD-R the most expensive. Media was another matter, I recall CD-R as being cheapest. Media capacity was another thing. My main hard dirve was just 80MB, so a 100MB Zip drive or 128MB MO disk was a huge amount of space, and a CD-R disk was nearly impossible to completely use.

More than two decades on, the longevity advice seems to have been sound. There's a gotcha, however. MO has basically disappeared as a format. Speciallized industrial use apparently exists. Even the audio version, the minidisc, never gained a lot of traction (at least in the US; Japan is another story). CD-R and CD-RW has proved to be a bit fragile, but it is also very widely available, and eventually the media got very cheap, so making multiple copies and duplicating stuff every year is reasonable.

When I was getting rid of my Mac IIci, I kept the MO drive and disks. Then I bought a computer with a SCSI card to be able to read the files. I've still got that computer (although it works poorly), the SCSI card, my MO drive, and all my MO disks. About five years ago I spun up the computer and drive and copied everything to CD-R. About two years ago, I copied those CD-Rs to back-up hard drives. One was bad. I should really spin the whole thing up again and make new copies from the MO disks, but for today, here's some photos. 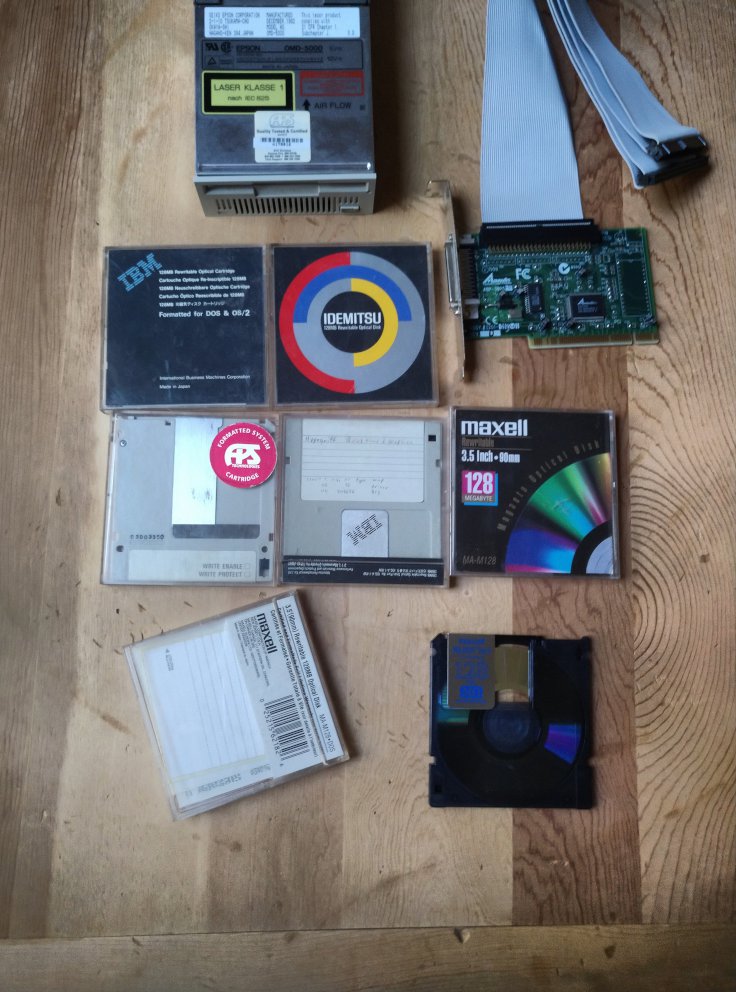 The 128 megabyte size MO was the smallest version of MO. In the 90mm form, 128 and 230 were available at the time I was buying, and larger capacities in 5.25" (130mm). Eventually disks up to 2 gigabytes were available in 90mm. As an aside, I was quite fond of that Idemitsu logo. 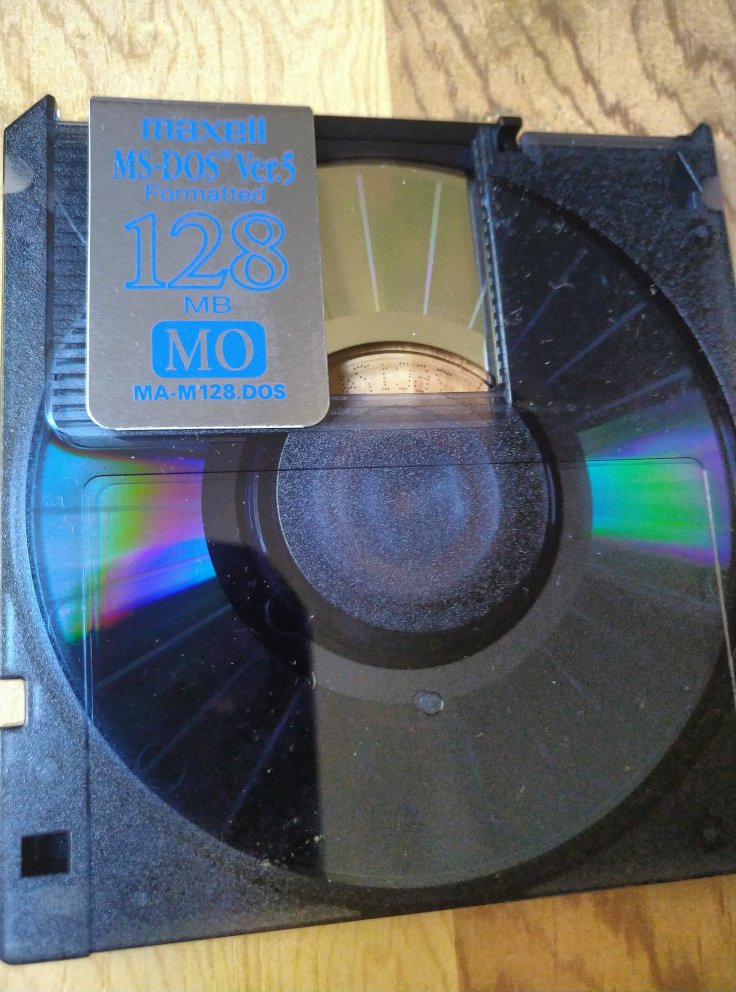 MO disk closeup open. Sector partitions are clearly visible. I used tape to hold it open for this shot, normally it springs shut. 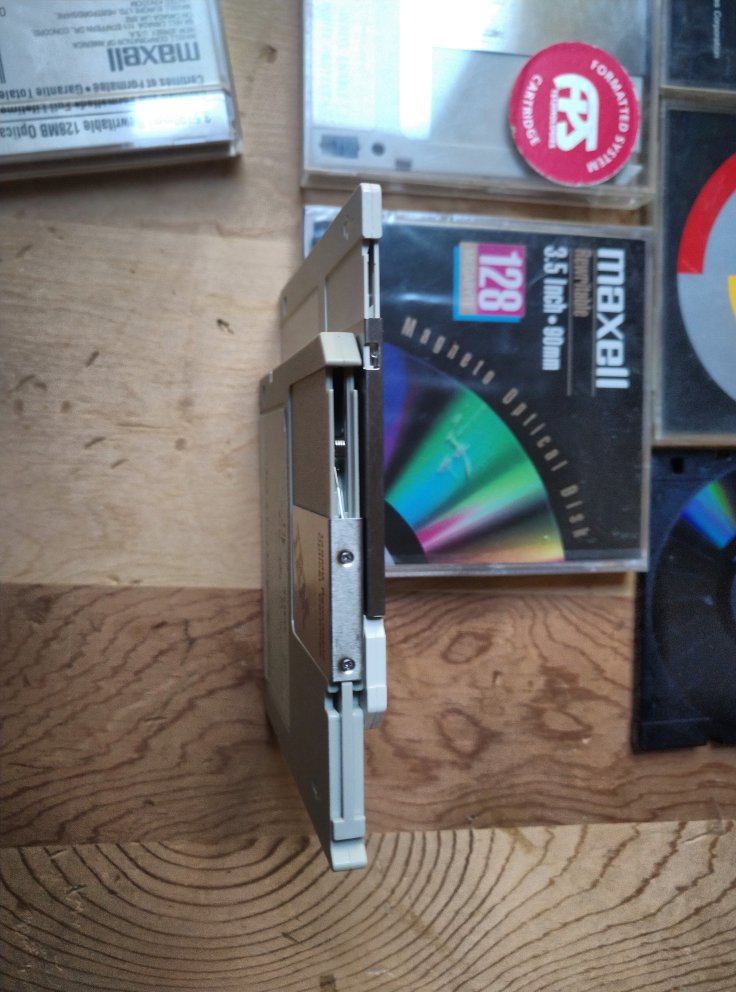 The MO disks are about twice as thick as a 3.5" floppy. 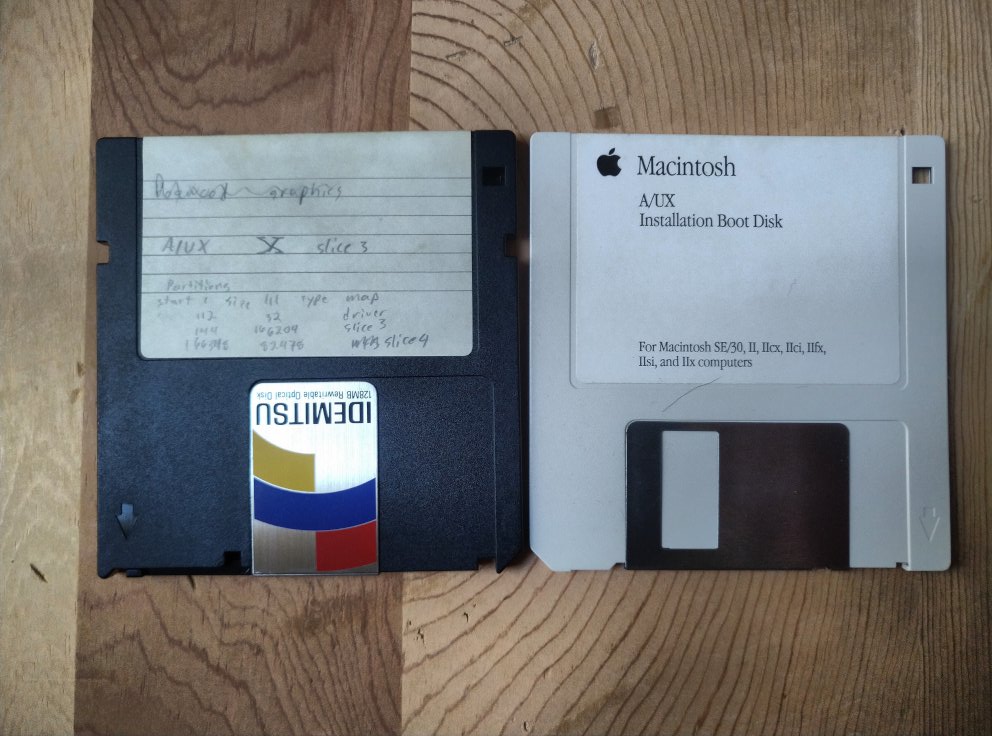 Same size, and very similar to 3.5" floppy from front

Pencilled in there is a summary of the partition table. This habit of mine made finding the partitions to read the files off from Linux much easier. 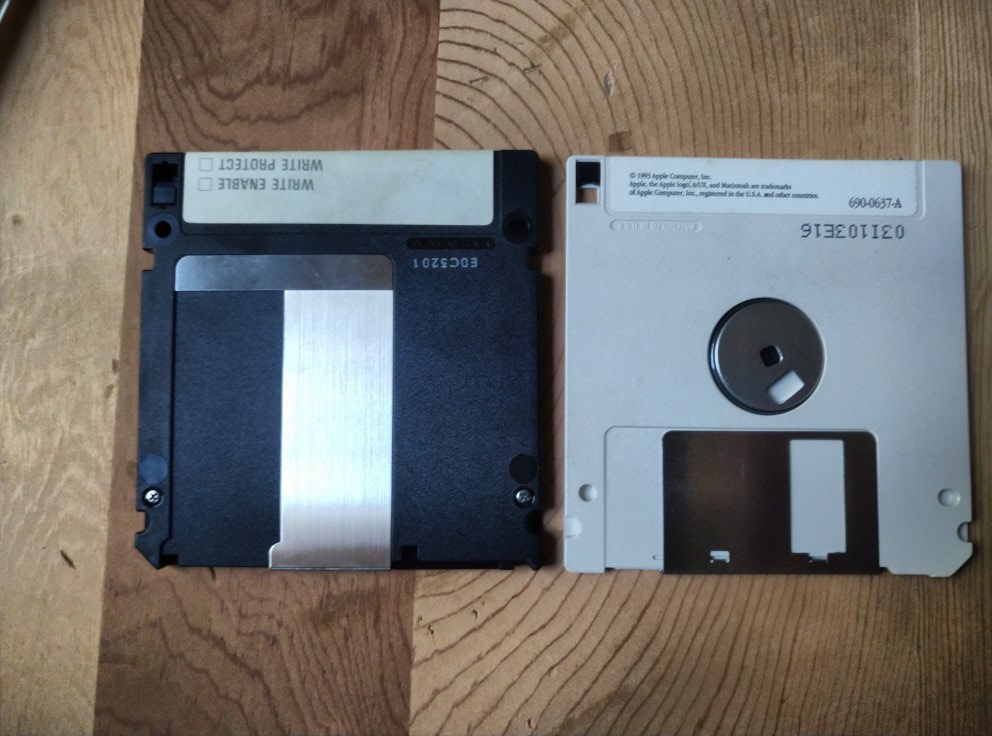 And from the back; note thought the cover extends over the hub 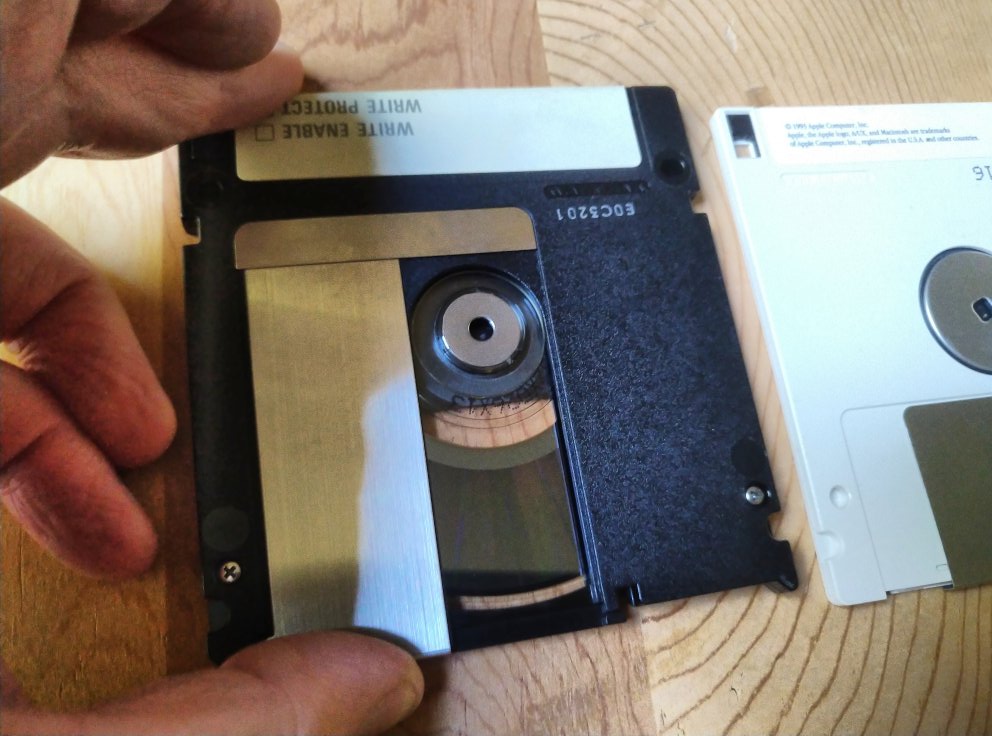 Back opened to show MO hub

The MO disks are bigger (in thickness), sturdier, and fancier than 3.5" floppies. Since the disks are sectored, the system doesn't need a notch in the hub to align things. 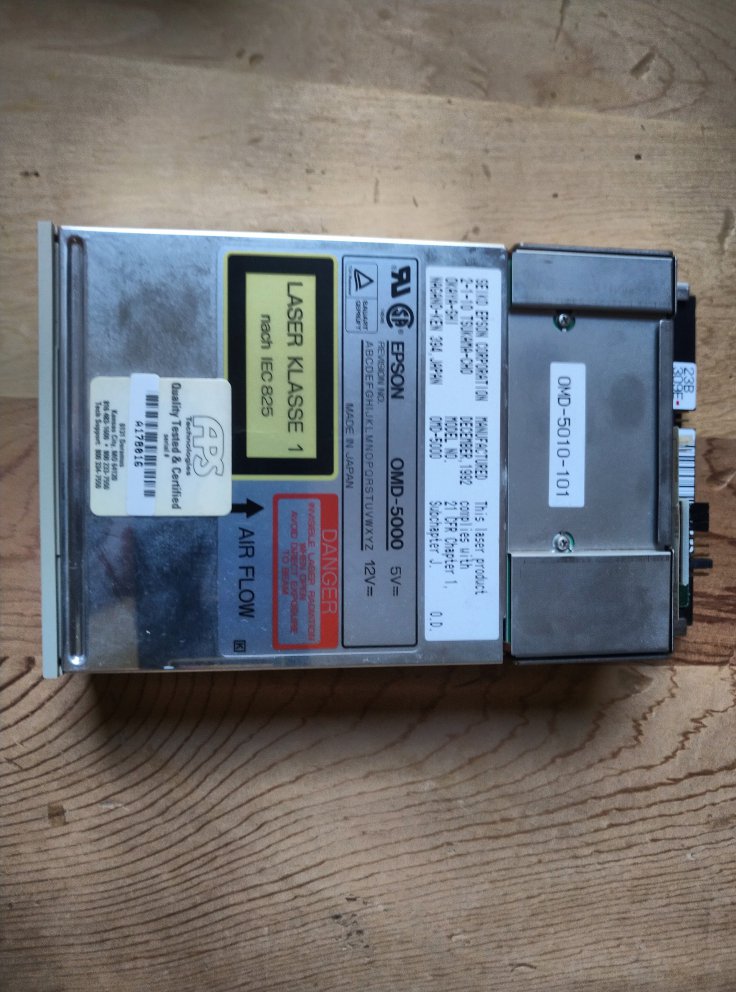 This was originally in an external enclosure with a 25-pin Mac-style SCSI connector. I pulled the drive out of the enclosure for ease of use post-Mac. The disks get warm during writes, hence concerns about air flow. 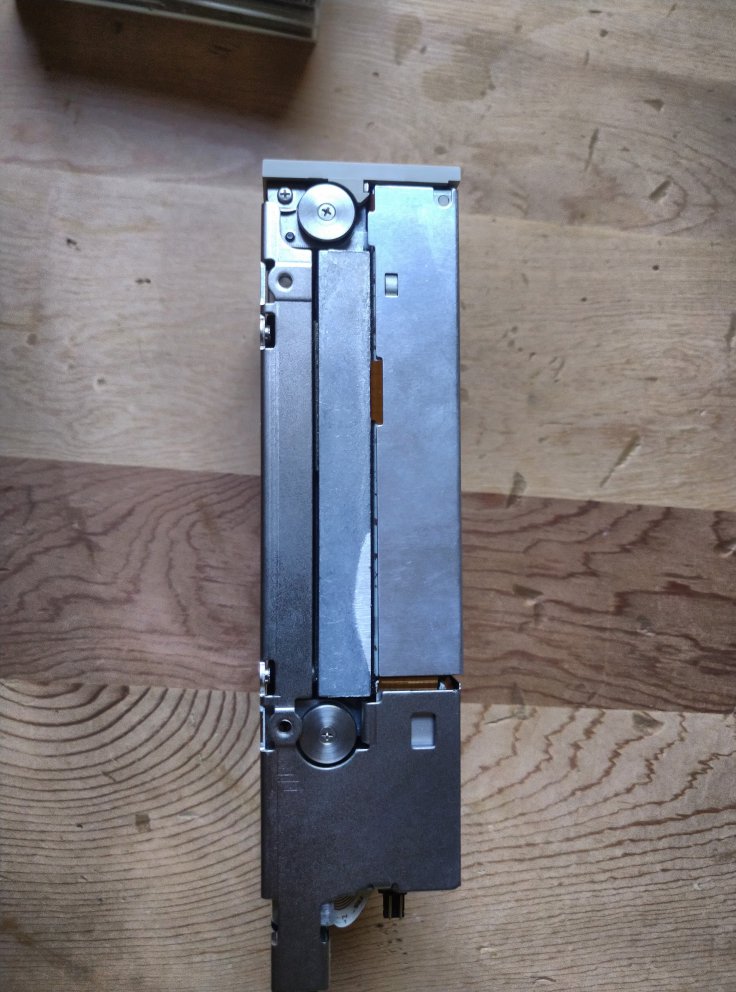 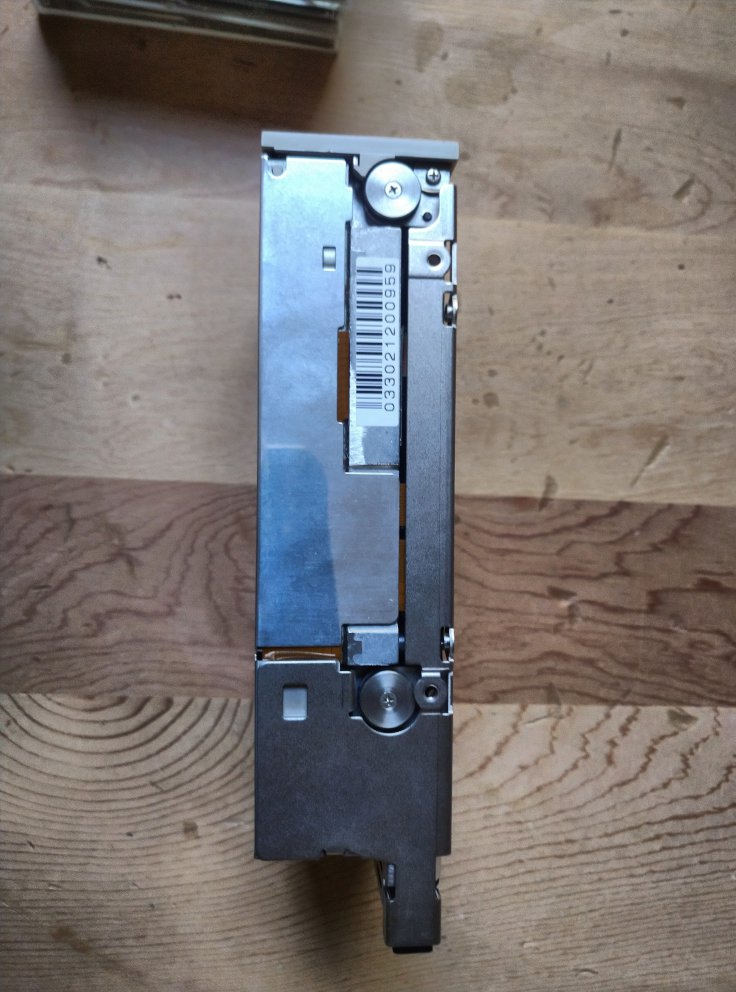 MO drive side view with barcode 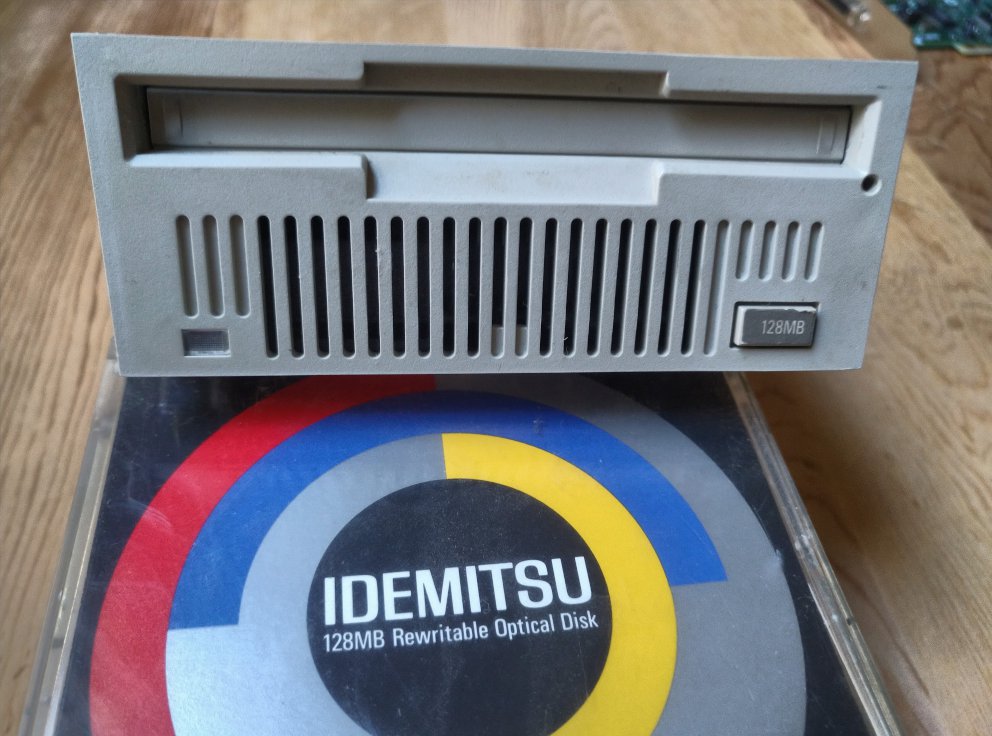 MO drive front, same size as a typical 3.5" floppy drive, but sweet 128 megabytes! The sticker on the eject button was optional.

I got, and probably still have, a special eject tool to poke in that hole instead of the standared bent paperclip. I used the tool with other drives, eg, those Macs that used a similar hole to eject CDs. The regular button eject activates an electro-mechanical eject, like on a VCR. 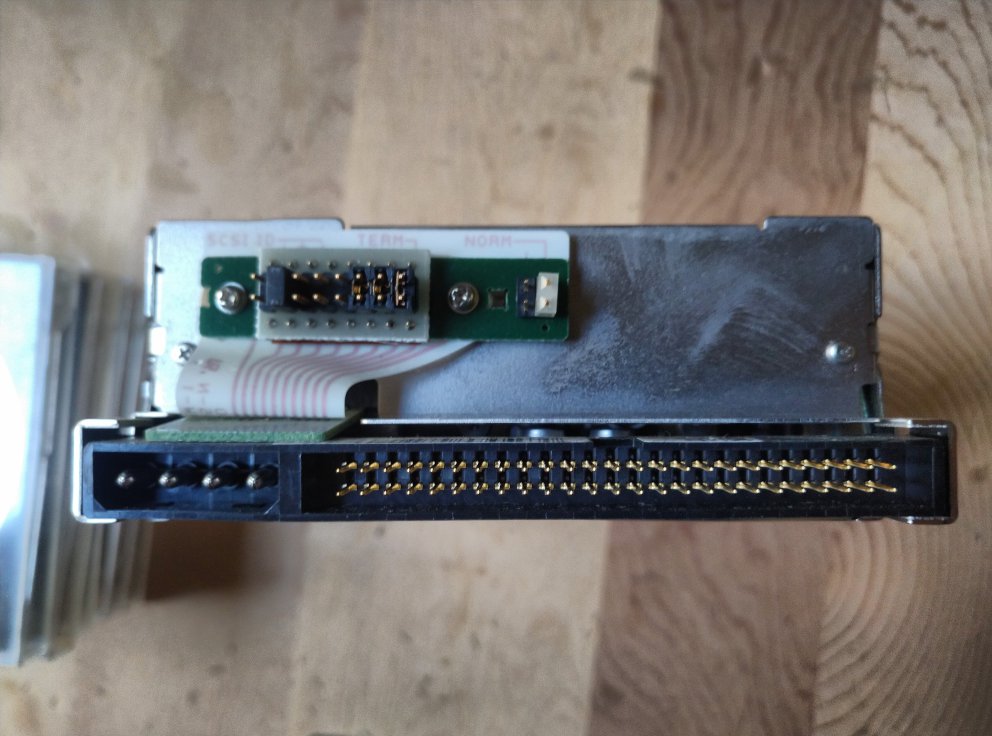 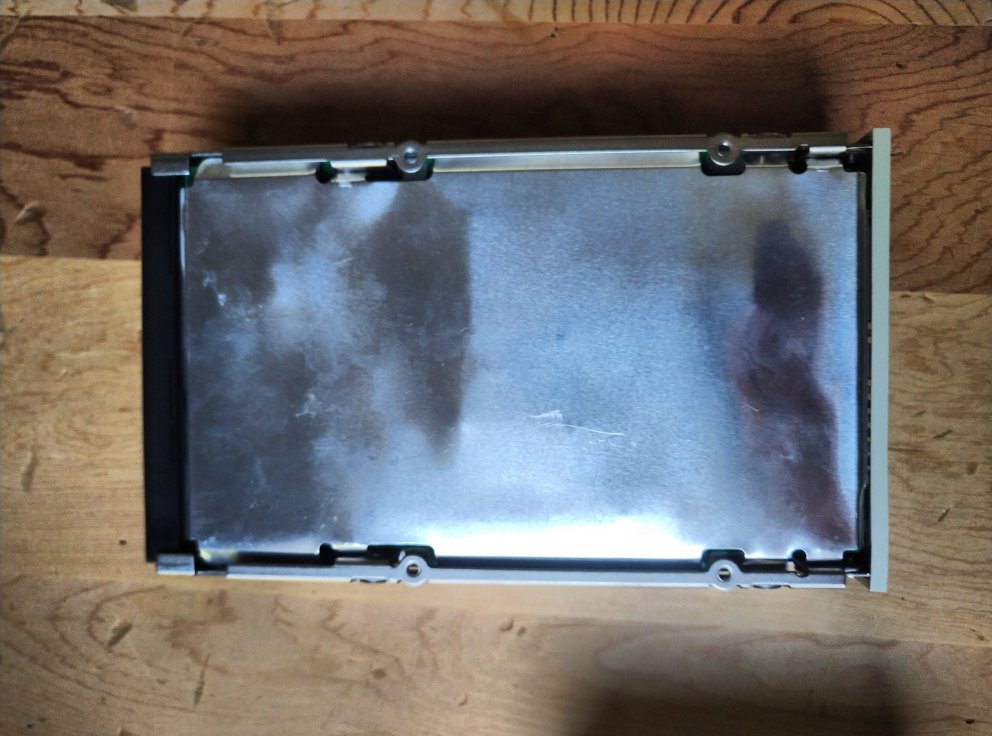 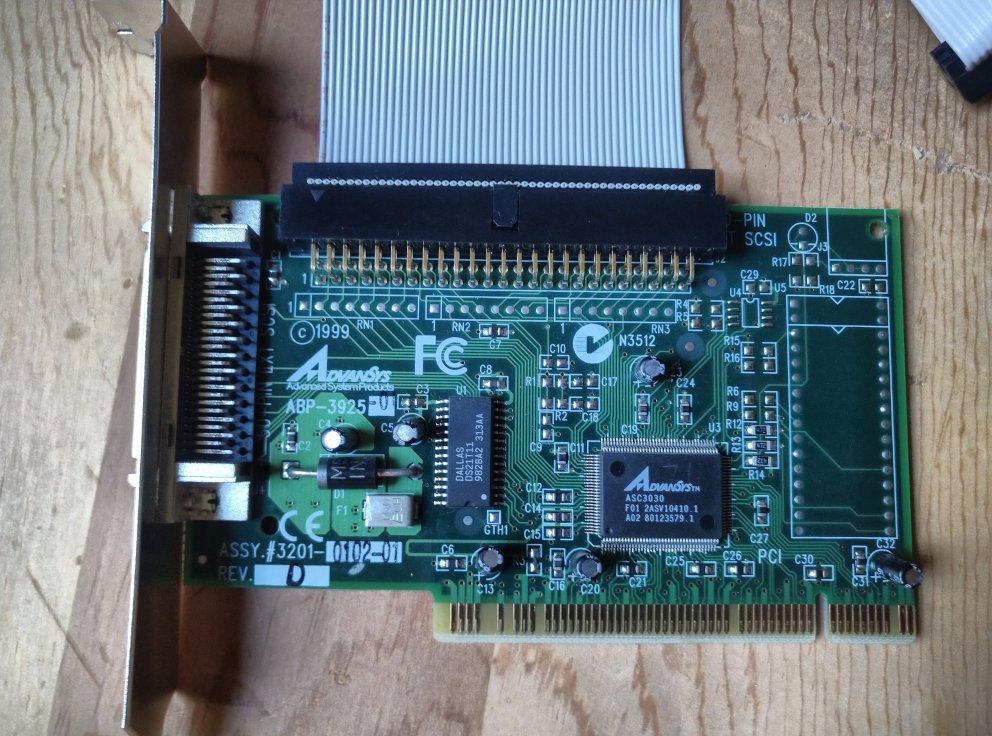 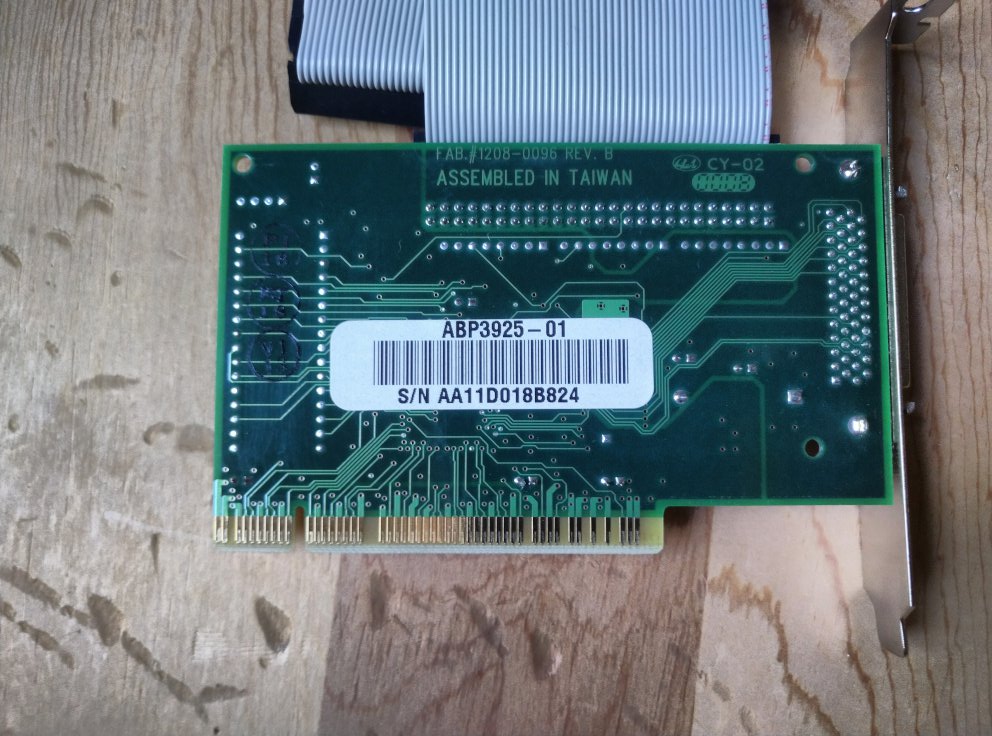 The computer I have to use this card doesn't have space inside for the MO, so I used it with the cable coming out the back. I don't keep the card in the computer, because of the cable mess.


All the parts to look like a fancy case mod, without as much work. Clear cases, light-up keyboards, various parts to put lights in and on your computer, plus tools and parts to do case mods, including PC quieting.

POKIA - retro phone of the future


Pokias are headsets from classic phones adapted to plug into cell phones as hands free headsets. This guy makes them one at a time and sells them on ebay, but I think I'm going to make one for myself.